NEWS
GT 2013: Hands on With Bear Lodge
Golden Tee’s Most Traditional Course Might Provide Its Most Intriguing Challenge
http://twitter.com/share
Prev News | Next News

Our 2013 course previews have officially reached their conclusion, just in time for the release of Golden 2013.

We’ve been surrounded by cacti, traveled to the jungle, and talked about trees the size of skyscrapers. Our final course, however, is a more traditional virtual-golfing experience.

Despite hitting with the massive Alaskan mountains in the background, you’ll be playing on a familiar surface on Bear Lodge. Don’t let that serve as a disclaimer when it comes to your course approach.

This might be Golden Tee 2013’s most intriguing challenge. 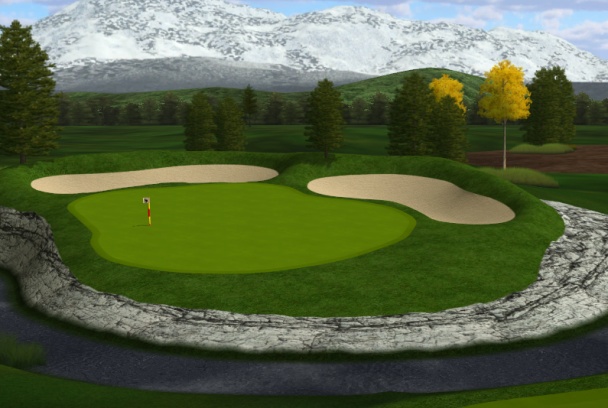 Bear Lodge isn’t loaded with water. In fact, you won’t run into a ton of it on the majority of the holes. With that being said, course designer Jim Zielinski did an excellent (well, not for us) job placing the liquid hazard in the perfect spots.

Streams run throughout the course and if you’re not careful, you will find them. Small bodies of water are situated near greens and going after pins could result in scorecard destruction. Trees hang near tee boxes and coming into contact will these leaves will result in, you guessed it, a penalty stroke.

You won’t really notice the water, until you’re far too close to. Like, FAR too close. This is your friendly reminder. 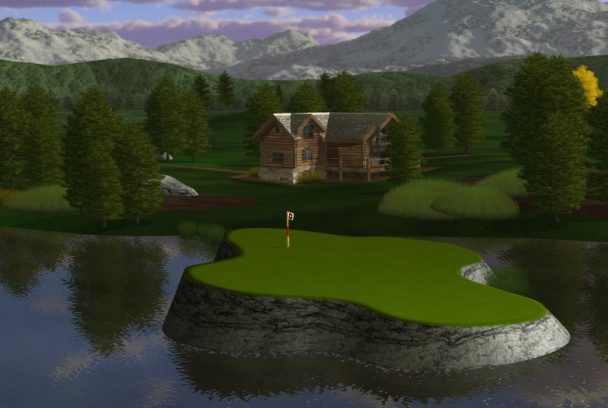 Without question, the par-5s on Bear Lodge are the most intriguing (and perhaps, most challenging) in the entire game. They are all about the tee shots, and you’ll know early on if you should even attempt to reach the green in two.

The 9th and 16th holes may be two of the tougher eagles to come, and you’ll have to be creative and accurate to manage the winds and different looks. The 16th hole in particular is a fascinating design that will take some time on.

In a lot of ways, we depend on par-5s to give our scorecards a boost. Getting birdies on these holes won’t be all that bad – at least most of the time – but eagles will certainly be earned. It’ll take one outstanding shot and another very good shot to even get there. Then there’s that whole putting thing. 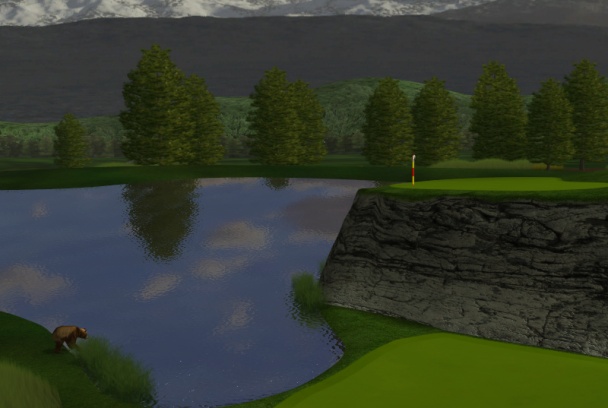 The concluding hole on Bear Lodge might just be my favorite in Golden Tee 2013. There are more interesting holes, no question, but this is one of the more intriguing designs the game has seen in quite some time.

It’s a drivable par-4 with the green situated elevated above the ground. There is a cliff on the left side – don’t end directly under it, trust me – and water directly behind the green. Don’t end up there, either.

There are trees guarding the tee box meaning you’ll have to finesse a solid shot around. Sticking the green isn’t easy, and you’ll need a nearly perfect effort to give yourself a manageable putt. This will be a fantastic closing hole, especially in tournament play, and the variety of looks and wind will lead to some very creative shot selections.

Stay tuned to Goldentee.com for it all.