NEWS
Spin a Game With Chris Young
One of Country Music’s Biggest Names is Giving Away a Tee Time Backstage
http://twitter.com/share
Prev News | Next News 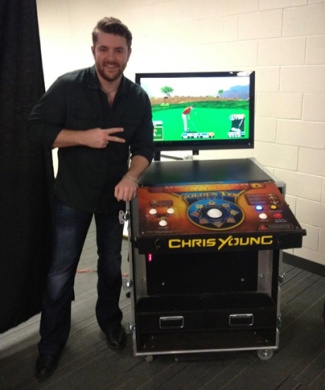 Chris Young is a country music star. He won the television show Nashville Star, soared up iTunes on multiple occasions and has since watched his career takeoff. And while Chris has more talent with the mic than most, he’s not limited to having just absurd amounts of musical ability.

We first became aware of Young’s Golden Tee obsession on Twitter. Every week it seemed Young would discuss and play his favorite game after a show. He’d post his scores, talk trash with his opponents online and his love for the game became very clear.

Now, you have the opportunity to play a game of Golden Tee with Chris backstage at one of his shows thanks to a sweepstakes being put on by Sony Music Nashville. Included in this trackball experience is: air travel, hotel and tickets to the show for you and a guest. Plus, you can see how your golf game stacks up to one of country music’s giants.

All you have to do is enter the sweepstakes at Sony Music Nashville’s Facebook Page, and you’re all set. It should only take a minute, and who knows, you could score big (and then hopefully low) here!

Whether or not you can take Chris down in a game is hard to know, but wouldn’t you like to have that chance? Enter here and you could find out.