NEWS
The 2011 Dallas Holiday Classic
The Final Tournament of the Year is Absolutely Loaded! See What Power Events Has in Store!
http://twitter.com/share
Prev News | Next News 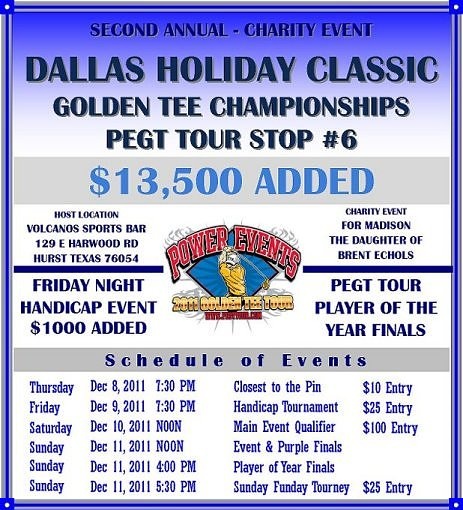 The final Golden Tee tournament of the year is closing in fast, and Power Events’ first GT Tour is winding down. Only one event remains before the Player of the Year tournament, and the 2011 Dallas Holiday Classic will wrap up the tournament season with two tournaments (plus so much more) for the price of one.

Volcanos Sports Bar and Grill will play host to this event on Thursday, December 8th through Sunday, December 11th. Whether you’re gunning for Player of the Year honors or you’re looking to take in your first trackball tourney, the second Dallas Holiday Classic is the place to be.

On Thursday the weekend will kick off with a double-elimination Closest-to-the-Pin contest that costs just $10 to enter. Friday, players will get another pre-main event warmup in a handicapped tournament. Entry into this tourney is $25.

The 2011 Dallas Holiday Classic will then get underway on Saturday with a five-course qualifier starting at noon. With two tournaments to be played – more on that in second – matches for the Classic will begin later on that evening.

On Sunday, match play will wrap up and the 2011 Dallas Holiday Classic champion will be crowned! All done, right? Not so fast, my friends.

Once this tournament is complete, the top 32 players with the most PEGT Tour Points will then compete for Player of the Year in a double-elimination bracket. Needless to say, Sunday promises to be one of the most exciting days in the history of the game.

Matches will start up shortly after the Dallas tourney concludes and will go well into the evening. Right now, the PEGT Standings are tight, and the majority of these top 32 spots will be determined by the Dallas Holiday Classic.

Even if you attend and don’t qualify in the top 32, you’ll have plenty to do. Outside of playing in the Dallas tourney and getting to see players duke it out for the Player of the Year title, Power Events will hold another tournament Sunday evening for you to enter.

These guys have truly thought of everything.

More than $13,000 in prizes will be handed out this weekend and both the Dallas Open AND the Power Events Player of the Year will be crowned. If you’re a fan of Golden Tee you do NOT want to miss this weekend.

It should also be noted that this tournament will benefit the daughter of Brent Echols, a Dallas-based Golden Tee player that passed away this year. A good portion of each entry fee will be donated to a trust account setup for her. It’s holiday time, and this kind gesture says a lot about the group of people running and attending the event. It’s something everyone’s proud to be a part of.

For more information or to sign up visit the official tournament thread on Underdogsports.net or check out Power Event’s official website.