Chicago Bears' all-everything linebacker Brian Urlacher is known for doing things like this.

While there’s no doubting the fact that #54’s calling is holding down the middle of a football field, Brian Urlacher also has talents that stretch beyond the white lines. Like hitting the trackball.

When Urlacher first signed on with the Bears, Incredible Technologies was one of the first local companies to sign him to an endorsement deal. This wasn’t a forced sponsorship by any means as Brian already loved playing Golden Tee before he knew the company was based in his backyard. And so the relationship was born and remains stronger than ever more than 10 years later. 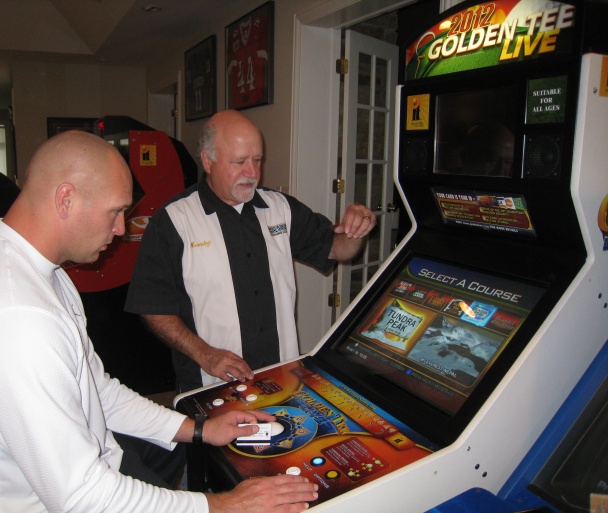 Recently the marketing team headed over to Casa De Urlacher to update his game to Golden Tee 2012 and pass along some tips for the new courses and explain all the new features.

Yes, this mammoth of man plays the game sitting down and he’s gotten quite good at it over the years. When he pulled the chair over and explained his playing style we looked at each other with raised eyebrows. Turns out he can still crush the ball, and he has perfected his form of playing while seated. For the amount of time he’s on his feet, we can’t blame him.

Outside of Golden Tee, Brian has Silver Strike, Target Toss Pro and Carnival King situated in an arcade room that’s difficult to leave once you enter. While he enjoys these games, his clear-cut favorite is virtual golf.

In terms of the new courses and features, Urlacher enjoyed his trip from the top to the bottom of the Grand Canyon and began using Bite early and often.

Although he hadn’t played the game in a while because of things like BEING IN THE NFL, his skills were still sharp. He prides himself on his putting and was even able to tackle (zing!) the dreaded right-one putts that can give him problems from time to time.

Brian will have to learn the new courses while trying to make the NFC Playoffs, but it’s only a matter of time before he does. He knows the game, has the skills and is as competitive as it gets. Plus, outside of loving Golden Tee and being one heck of a football player, Brian is also a good all-around guy.

Here’s to a healthy season and great scores to one of Golden Tee’s biggest fans. 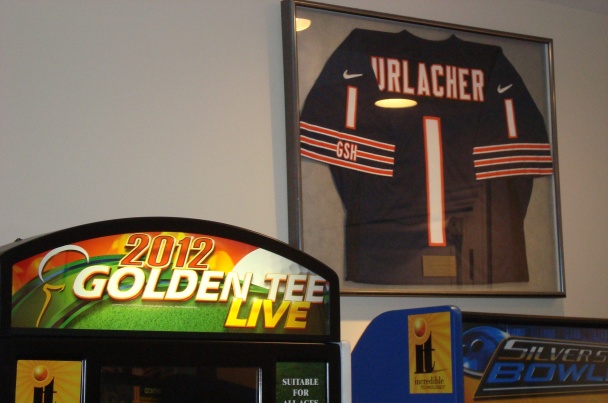