NEWS
Differences Between Arcade & Mobile
These are the differences from the new Golden Tee Golf for Apple & Android and the stand alone cabinet.
http://twitter.com/share
Prev News | Next News 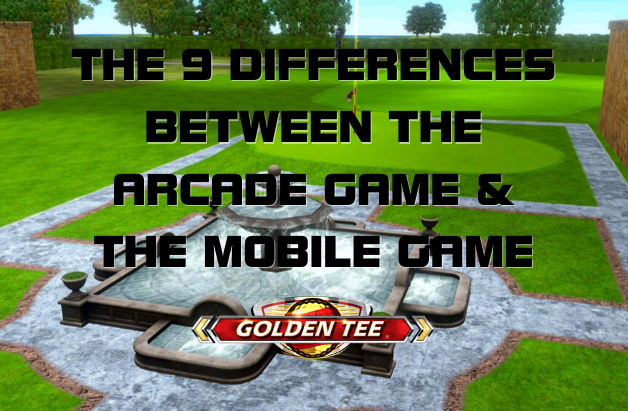 This is still Golden Tee Golf after all, so there are many similarities to the amusement version with familiar courses, outfit changes, and similar tees & balls. But we are going to focus on the differences between the two to help you get a better score and succeed on your devices! 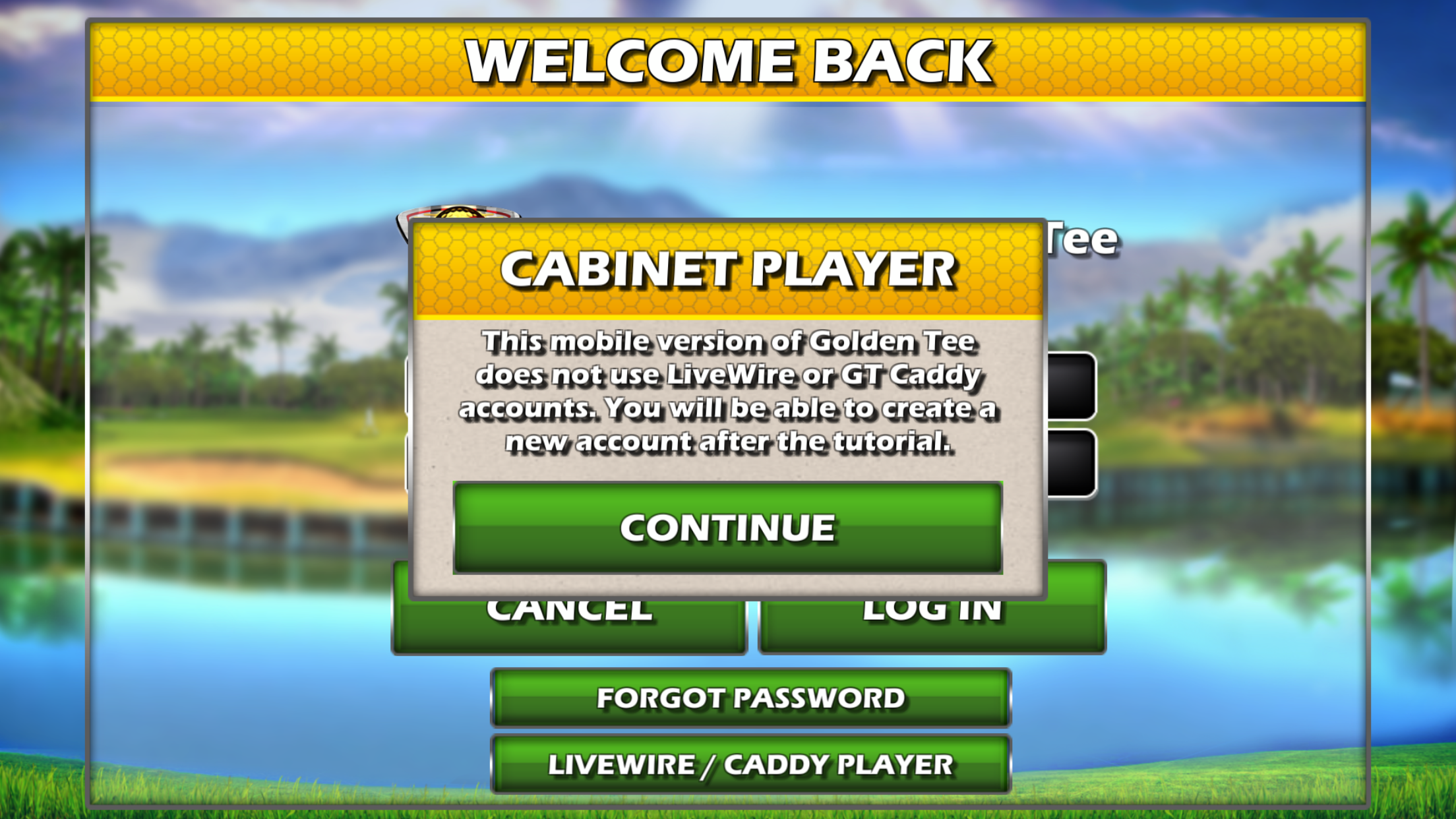 Your LIVEWIRE / GT Caddy account is not tied to the new Golden Tee Golf game for Apple and Android devices. The two are separate games and will require you to create a brand new account on your mobile device. 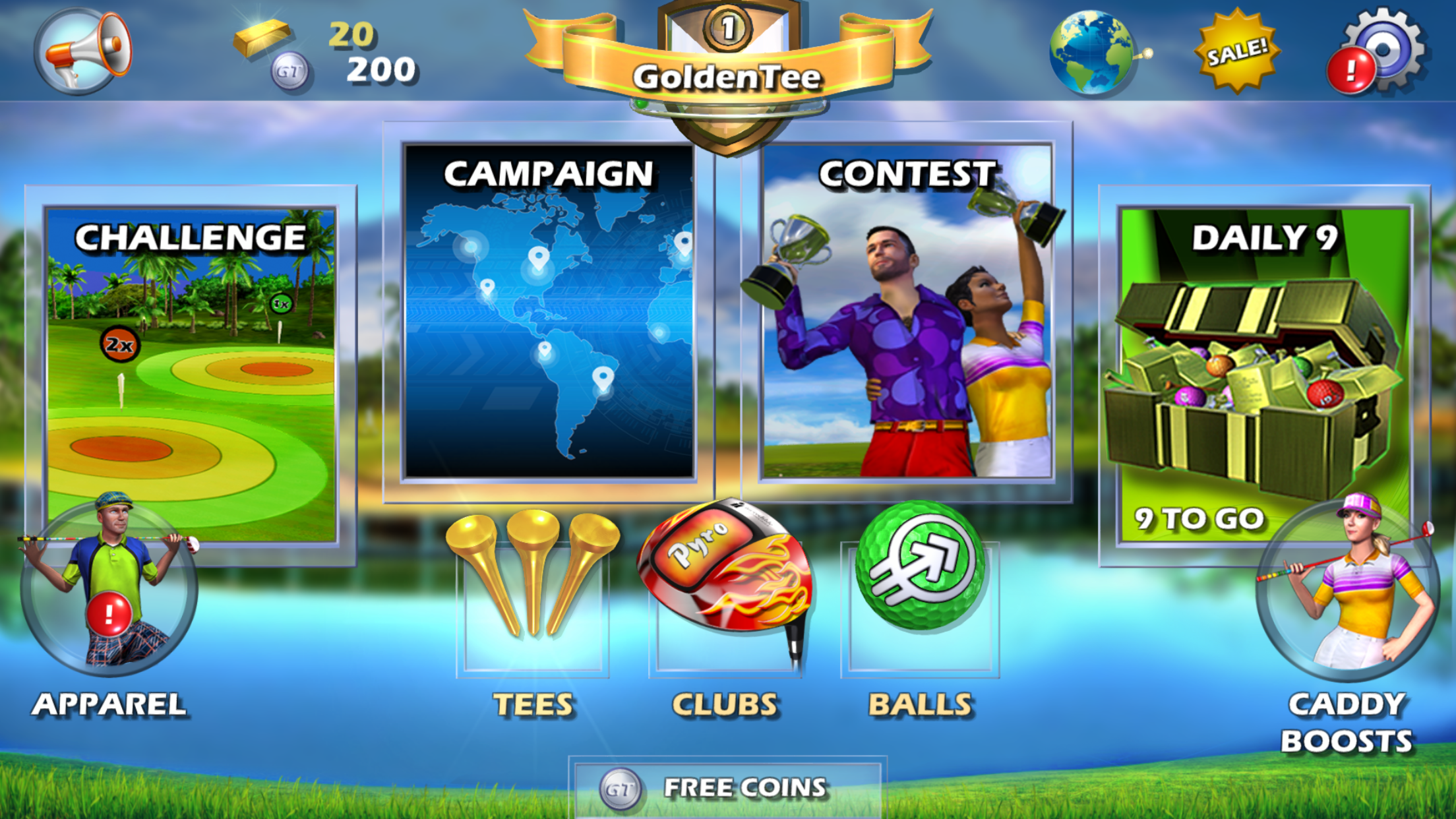 There is a mix of new and familiar modes along with some twists. There are six game modes: Challenge, Contest, Campaign, Daily 9, Head to Head, and World Qualifiers. Try new shots with the challenge mode, play your friends in Head 2 Head, play in various course contests, take on the Daily 9, and move your way through the courses one at a time in the campaign mode. use those skills to qualify for the World Championhips. 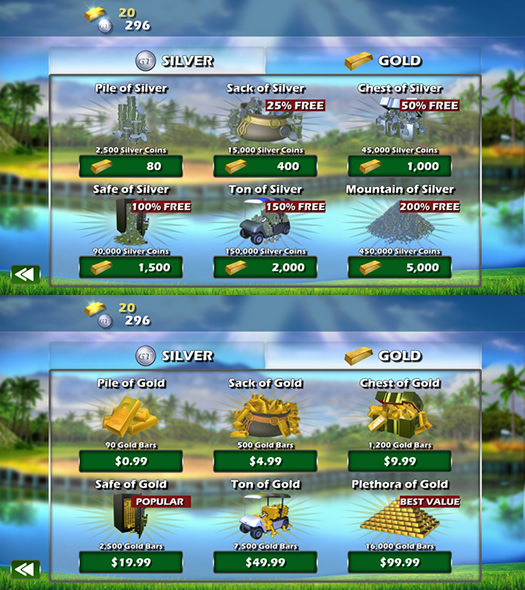 You earn gold bars and silver coins for finishing challenges and campaign modes. Wager them in a 9 hole contest mode to take home the winning pool of bars or coins. Use them to upgrade your tees, clubs, and balls!

Take 9 single shots at the hole on 9 different holes. The Daily 9 is a daily contest similar to Closest-to-the-Pin.  Take your time your shots to get the lowest total distance from the hole.  And if you don't like a shot, you can use gold bars to take another crack at it! 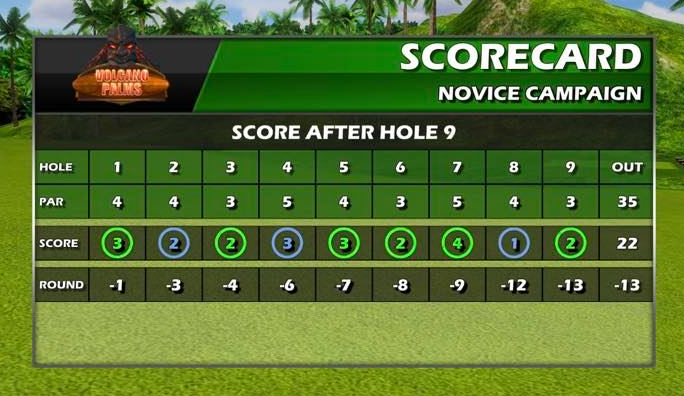 Golden Tee Golf for your Apple & Android devices has the feel of cabinet play in a ton of aspects. The biggest difference to game modes is there are no 18 hole games (just yet). Courses are played by the front 9 or the back 9. We understand that time becomes a factor while playing on your device, so we’ve cut down the length of the game here, but we are working on the possibility of having full 18 hole courses in the future.  Only time will tell! ;)

This one is going to be hard for players of the amusement game that use their thumbs or hit the trackball without a backswing. Your power for your drive, chip, and putts are controlled by your backswing. As you can see above, the top left box shows how hard you are hitting the ball. You won’t have to power your fingers through your screen trying to hit it harder. Just a simple flick of the direction you would like to hit is all that is needed. When putting, you’ll need to backswing for all putts. 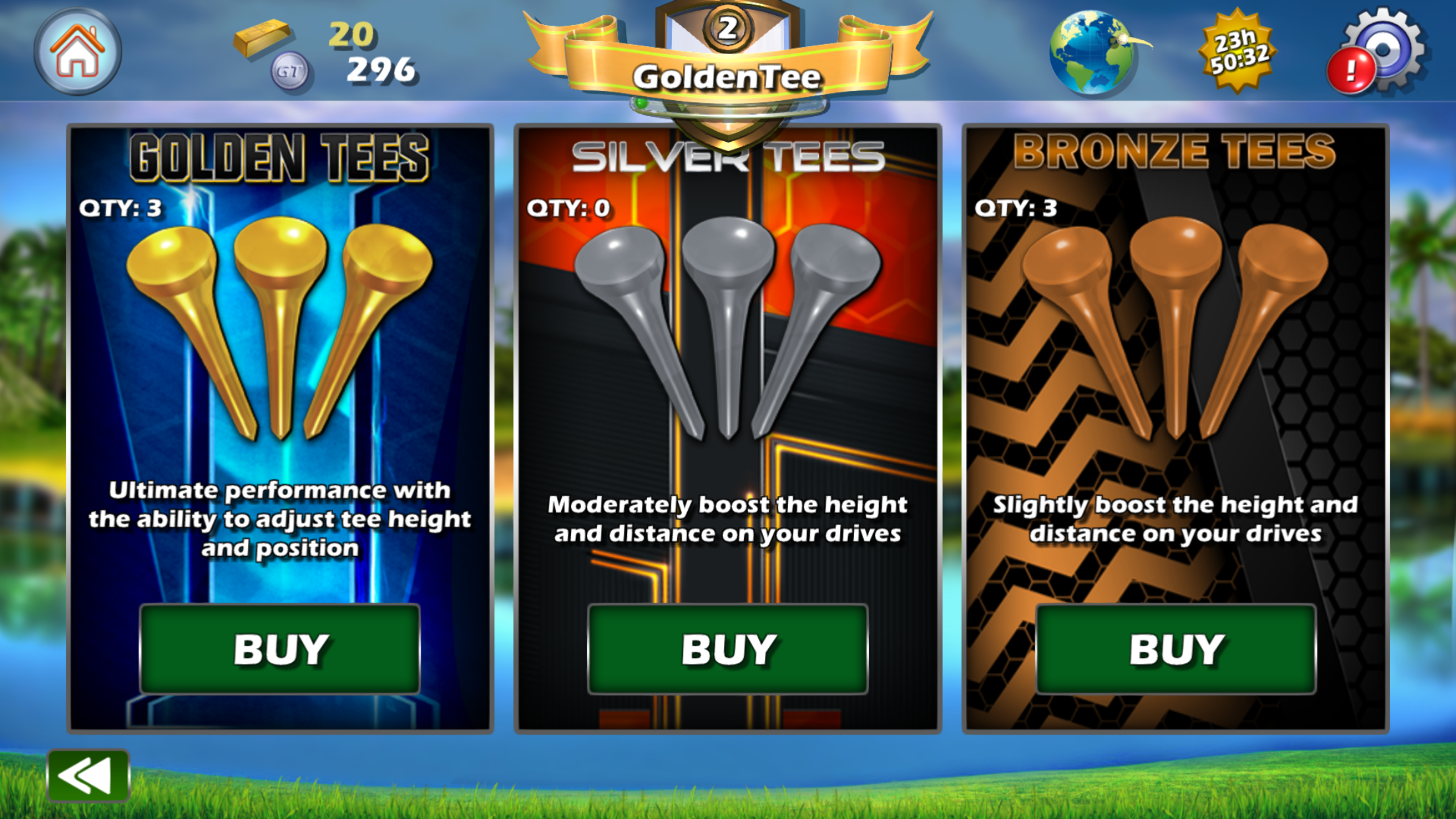 There are a variety of tees to choose from in the game. The bronze, silver, and gold tees each give a different stage of height and distance to your drives. The gold tees are the only tees that allow you to move your tee on the tee box like you can in the amusement game. 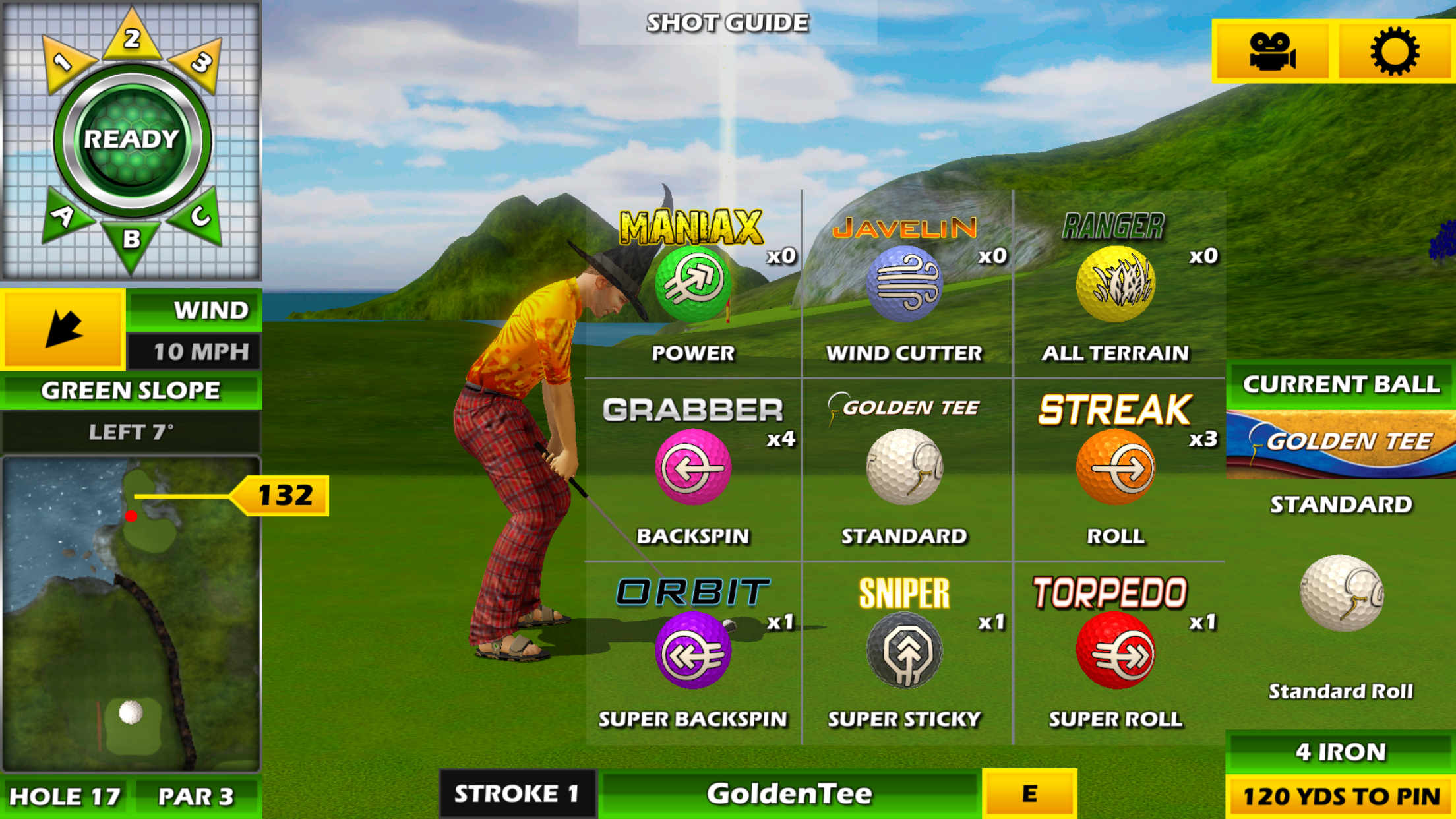 Standard balls are default for each of your shots from driving to chipping. But on each shot, you will be able to select a different type of ball that will affect your shot. This gives you the luxury of playing different shots you wouldn’t be able to make with one specific ball for an entire round. 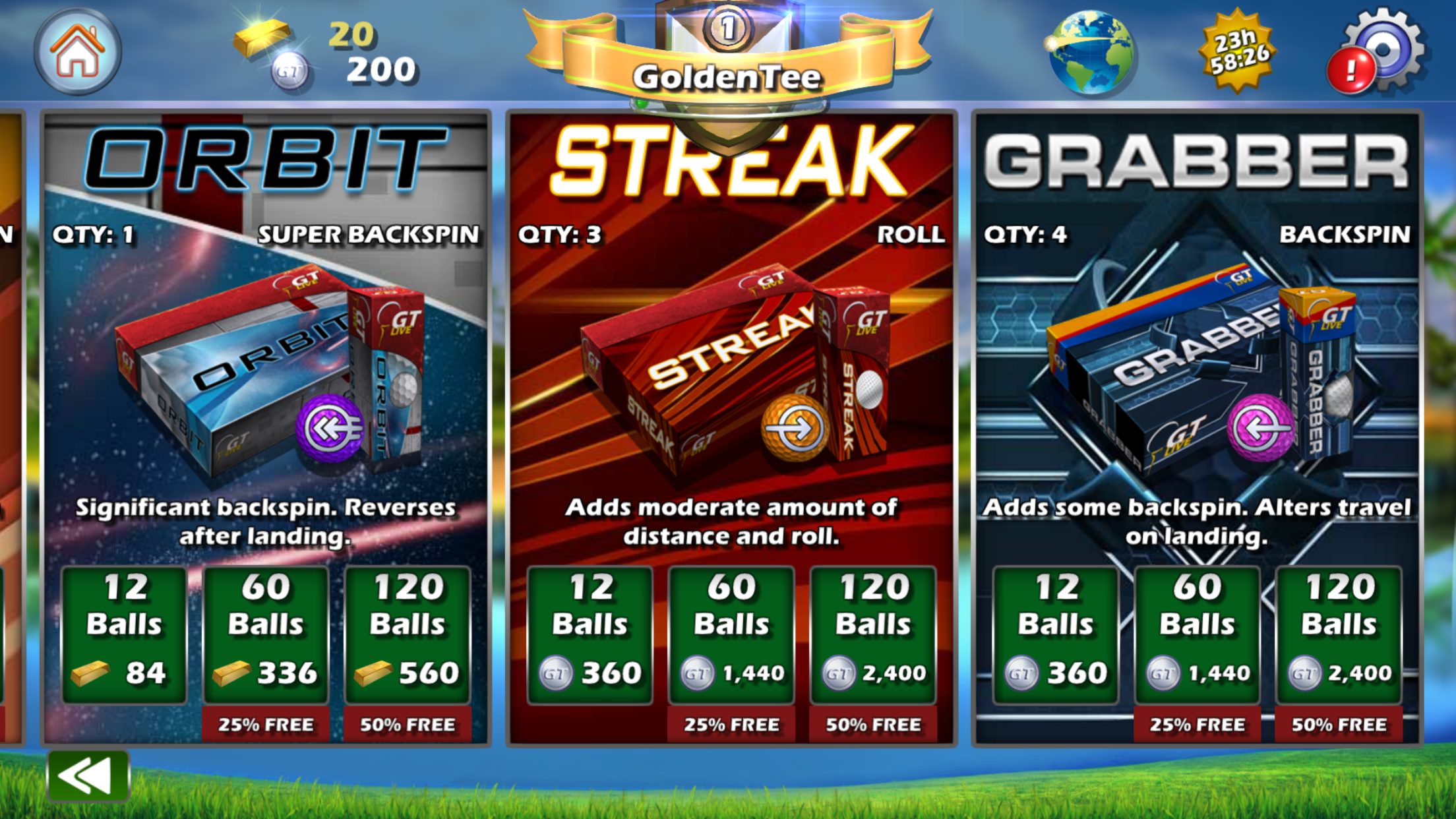 When you level up you will start receiving new clubs. You can use your silver coins to upgrade or get an early upgrade for $0.99 if you want to move up the ranks quicker. Balls are a bit simpler than upgrading your clubs. You buy your balls with silver coins and gold bars. Different balls are set at different amounts. Maniax which boosts your distance and softens your landing are more expensive than the grabbers which add normal backspin. Make sure you are stocked with a variety of balls since you have the unique ability to change your ball with every shot. 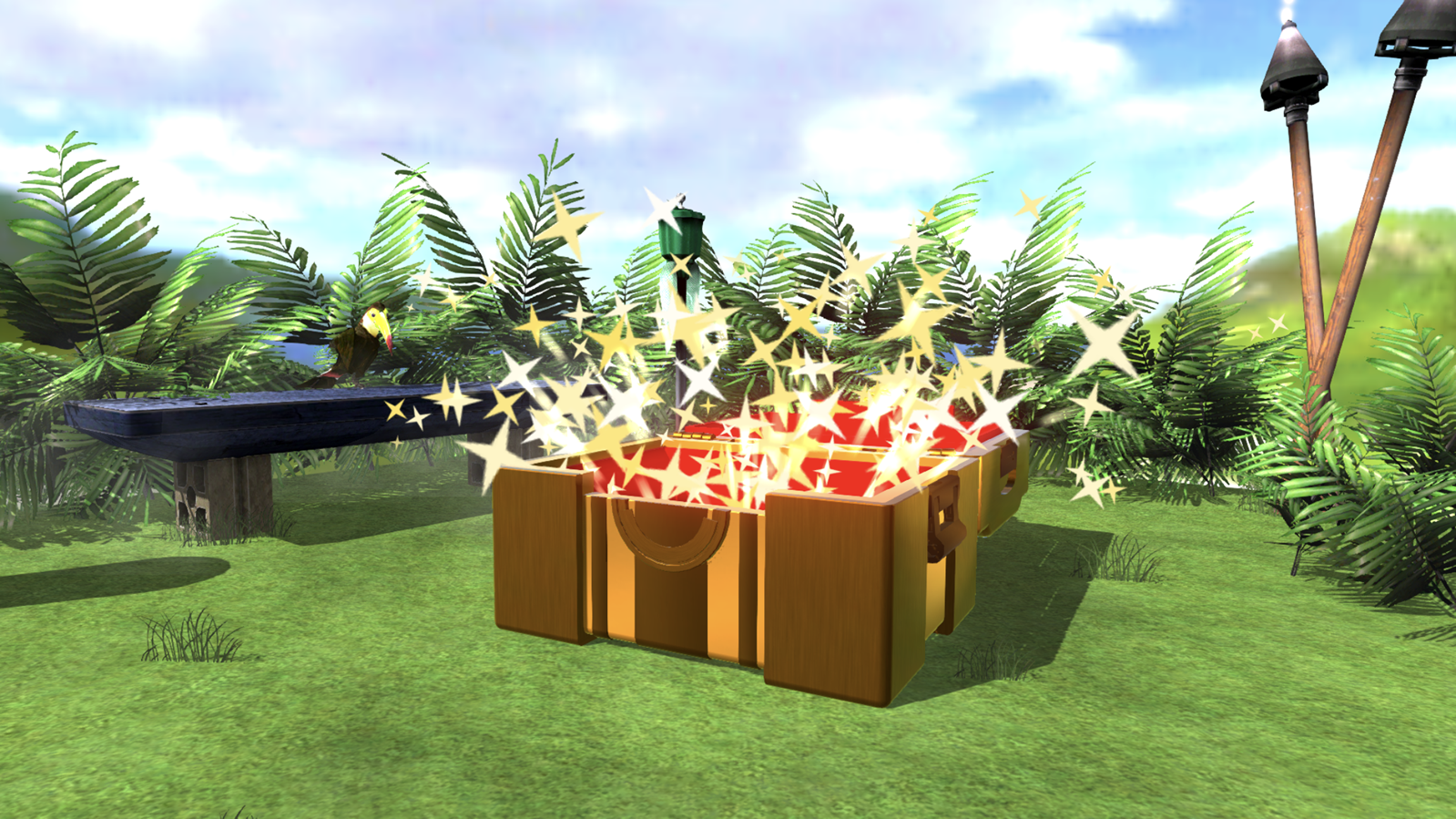 Test your luck with chests! Open chests with different amounts of gold bars and see what you can win! Gain silver, balls, tees, and more when you wager gold for a big reward. Each chest will have a bonus spin to add 2x, 4x, or even 6x the amount that you've won! Get playing and get a free chest every 24 hours!

Did we miss anything? Download Golden Tee Golf for Apple & Android devices. Make sure you are following us on Facebook, Twitter, and Instagram and be sure to join the Golden Tee Golf Mobile Players group as well!