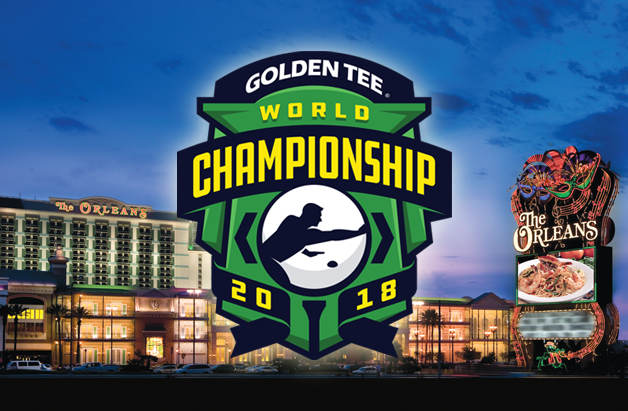 In the long history of Golden Tee, the very foundation of the game has always been its competitive nature. From the games you play with a buddy for a beer to GT’s biggest moments—the World Championship—with money and fame and trackball immortality at stake.

This year, never have the stakes been higher. The 2018 Golden Tee World Championship will take place on June 8-10 at The Orleans Hotel and Casino in lovely Las Vegas. Up for grabs is more than $100,000 in prizes, including the $20,000 top prize. Plus, our winner will become a playable character in Golden Tee next year.

But before get to the LIVE event, we must first find our field. Specifically, we must qualify the 64 players who will compete in the magnificent 800-seat showroom.

Right now, you can secure your spot in the Golden Tee World Championship through our Prize Play qualifier, which will fill 50 of the 64 spots between February 1 and April 11.

During this time, we will have five separate two-week events in which players must post scores in a total of 25 games—five from each Golden Tee 2018 course. Those courses are Calypso Key, Mayfield, Safari Dunes, Rhineland and Royal Dubai.

A player’s five BEST scores over this two week stretch will be added together—meaning once you hit your five-game requirement per course, a bad game won’t hurt you. The more you play, the more likely you are to post a big number and improve your rank. Great Shot Points will serve as a tiebreaker.

For each two-week event, the top 10 players will each secure a spot in the Golden Tee World Championship and will be removed from further following events once they are locked in. In the instance that one (or more) of the players in these events cannot attend, we will move down the rankings to ensure we pull 10 from each qualifier.

Each event will open and close at midnight central, and the dates for each Prize Play qualifying event is as follows:

By April 11, we will have qualified 50 players in Prize Play along with players from other game modes and platforms—details of which are available here.

As for what’s at stake in the live event, which will take place on June 8 through June 10, here are the prize payouts for all 64 spots.

We will have a full breakdown of the live event soon, but for now be sure to save the Golden Tee World Championship Home Page to see the Event leaderboards that will update multiple times throughout each day.

Good luck to all.