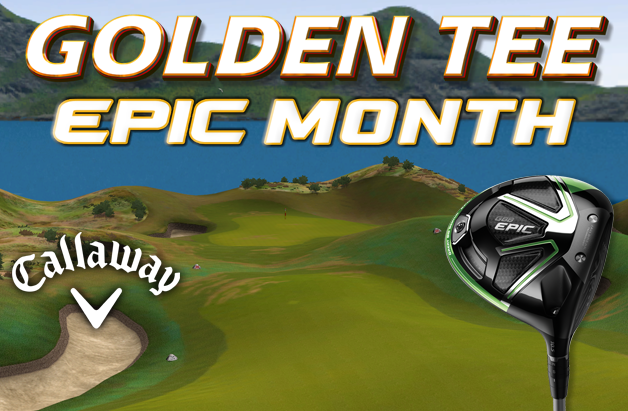 Our friends at Callaway Golf have done it again. This year they produced the most popular driver in golf—the EPIC Driver with Jailbreak Technology. And throughout the month of July, you can win this amazing golf club with one single shot in the game you know and love.

All you have to do is have the longest drive of the week and you can win!

Our second week winner, Robert Murphy, hit the longest drive of last week on Heather Pointe.  His drive was 469 yards!

All it takes is the longest drive each week, on any LIVE course, and you could be our next winner!

Each contest will begin at 12:01 a.m. central time on the designated start date and close at 11:59 p.m. central on the end date. We will pull information across all LIVE game modes—contest play, prize play and invitational game modes—in states that allow prize play. Only games played on these machines will be eligible to win.

All courses will be eligible during this time. Have a course that you believe is conducive for a long drive from 2005 or 2007? Fire it up. Any course will work.

Each Monday after a contest has concluded, we will announce the winner from the previous week. At the end of the month, we will celebrate the longest YouTube in all of its brilliance and officially close out an EPIC month.

That’s it. Just play your game—check in using your Player Card, credit card, Lost Card ID or Cardless ID & Pin—and you have a chance to win no matter how well you shoot.

A few items of note:

The contest is limited to prize play states only. Non-Prize Play states are ineligible and include Alaska, Louisiana, New Jersey and South Dakota.

Home Editions are also ineligible for this contest

Players are only eligible to win one driver during the month. If you are highlighted on Goldentee.com for your spectacular driving skills and the proud owner of a new EPIC Driver, you won’t be able to win again. (We want to spread the love.)

To help us track you down, be sure you have a web account tied to your player card or other means of check in. You can accomplish this on LIVEWIRE or download the GT Caddy app.

We will reveal our winners on LIVEWIRE and reach out to players after each contest throughout the month of July. By the end of the month, five players will have an amazing new Callaway club in their bag.