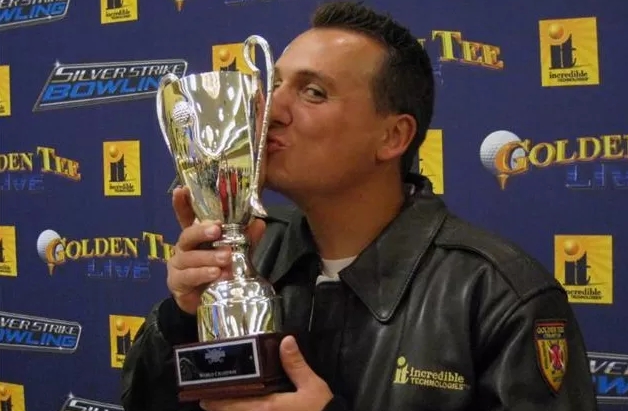 It’s like it all happened yesterday. One by one, the last Golden Tee World Champion recites his previous trackball failures.

Having climbed the top of the highest GT Mountain, Andy Haas can still recall what it felt like before everything it came together. Long before he kissed the Hodgson-Zielinski Cup shortly before sunrise during September 2008—conquering an entire room of Golden Tee players—Haas struggled to get by the second round.

He knows the opponents and the course—“I remember my loss to Chris Eversole on Tropical Falls like it was yesterday,” he says before dashing to his next loss.

“It felt like somebody stabbed me in the heart,” citing yet another match that didn’t go his way.

In just about all of these instances, the Ohio native could even recite the hole and club he hit where it all fell apart on the brightest stages. These moments, above anything, fueled Haas as he entered the 2008 Golden Tee World Championship.

“Ship It!” was a known name by the time September 2008 came around. You probably know it from LIVE leaderboards and the Daily Contest. He was already one of the best players on earth. He was established and feared within all GT circles. But something was missing.

Heading into the Golden Tee 2008 World Championship, Haas had his doubts. Playing at the Las Vegas Convention Center—the exact location he’ll attempt to defend his title on March 16-17 just a few weeks from now—he wondered if he could break a streak of disappointing showings.

“I was happy to be there the first year when I won a few matches, and I had no expectations at all,” Haas said. “But by 2008, I was definitely wondering if this would ever come together. This was the event I could not win.”

The goal was to change that in Vegas, and he approached it as such. With the temptation of Sin City in play, Haas awoke after retiring early the next before. He wanted to be fresh.

The friend he has traveled with was still gambling at a table—enjoying Vegas the way it should be enjoyed—unless, of course, you’re playing for everything Haas hoped to take home that day. The two friends connected before the madness began at the buffet, having had very different evenings.

After qualifying with a much larger group, single-elimination match play began later that day. Haas and many other experienced players remaining knew the routine. They had been there before—the matches, the pressure and everything that came with it. But even this was somewhat different. 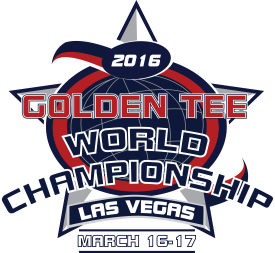 “You’re out of your comfort zone,” Haas said on the setup. “We’re used to playing in the confines of the bar. This was much different than anything we have done, and it will be again this year.”

Almost instantly, he could feel it. You know this feeling, even if you’ve never had it on a stage this grand.

Some days, your Golden Tee game is just locked in. Haas could tell early on that everything was in order.

He was able to play through his first few matches without issue. But given the format, the room for error was none.

“One huge game from an opponent,” Haas said. “One huge mistake or one bad shot. It’s always going to come down to some luck.”

He managed to parlay luck with excellent play. And after maneuvering his way through the matches early on, Haas made it to the finals where he took on Minnesota’s Chris Thorbrogger. With cash and a spot in the game on the line, the two played it out for a shot at Golden Tee immortality.

It was the wee hours of the morning. Even for a town like Vegas that operates under its own curfew, the day was long. Morning was coming. As the clock pushed past 3 a.m. and daylight approached, Haas took down Thorbrogger to win the title.

After struggling to find stable footing in the event, he finally added the game’s most prestigious crown to his trophy case.

“Maybe I’m super lame,” Haas said, letting out laughter. “But other than my wedding day and the birth of my child, it’s the best day of his life.”

Those close to Haas wondered why he spent so much time in front of this game. They understood his love for Golden Tee, but they wondered what it was building toward. When he won the Golden Tee World Championship, everything changed.

This hobby that they could not begin to understand took on new life. Already one of the greatest to ever play, Haas entered a new stratosphere of greatness.

“I don’t know anybody who is the best in the world at anything,” his father said to him after he had won. Although his passion did not demand validating, Las Vegas changed the way those around Haas viewed this “game” he played.

Since that moment, Haas has added a few more tournament titles to his shelf. This past December, he won Power Events’ Dallas Holiday Classic and the Player of the Year Event on the same Sunday.

This performance guaranteed him a spot in the 2016 World Championship, which is suddenly oh so close. The $10,000 top prize awaits.

It’s been more than seven years since Haas won the title, although he will travel to Las Vegas with a title to defend. The competition to defend this prized piece will be fierce—perhaps as demanding as it has ever been—although perhaps he’ll find the same rhythm he found after so many years of chasing it down.