NEWS
The Greatest Game Ever Played... Again
Andy Haas Shoots a -37 in a Single Game of Golden Tee
http://twitter.com/share
Prev News | Next News 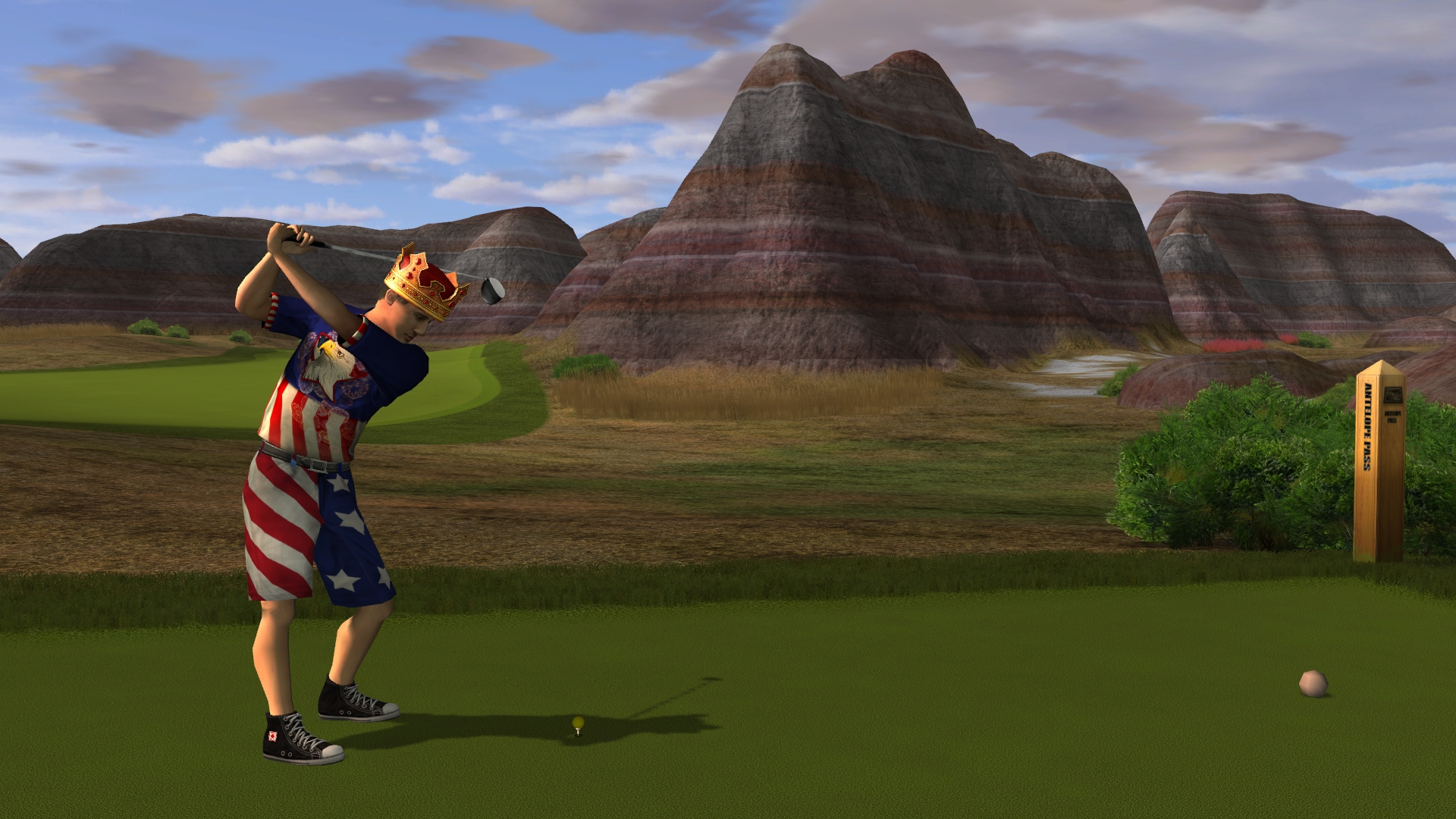 Back on June 3, I introduced you to the greatest round of Golden Tee ever played. Well, about that...

I told you all about Golden Tee World Champion Andy Haas and his 36 under—yes, you read that right—on Pearl Lagoon while playing the Daily Contest. We explored the ins and outs of this virtual-golfing wizardry and how it somehow came together. And when it was all done, I left you with this.

Perhaps a -37 is closer than we think…

That seemed like a fun way to end that kind of article at the time. It felt right. Deep down, however, I didn’t think this is something that would happen, especially not later in the year. I just needed something to close the piece.

Yes, it happened. In an 18-hole game of golf—the Daily Contest—the Ohio native dropped a score that looks more like some sort of programming glitch. But it’s real, and it happened on Antelope Pass.

It once again came on Daily Contest, a game mode that allows players repeat looks at the same conditions. This -37 did not happen in Game 1, Game 5 or even Game 10. This took time and repetitions. It shouldn’t make shooting 37 UNDER PAR any less absurd.

He took 35 shots to complete the round. He putted only eight times. Think about that for a moment… eight putts in an 18-hole game. Goodness. 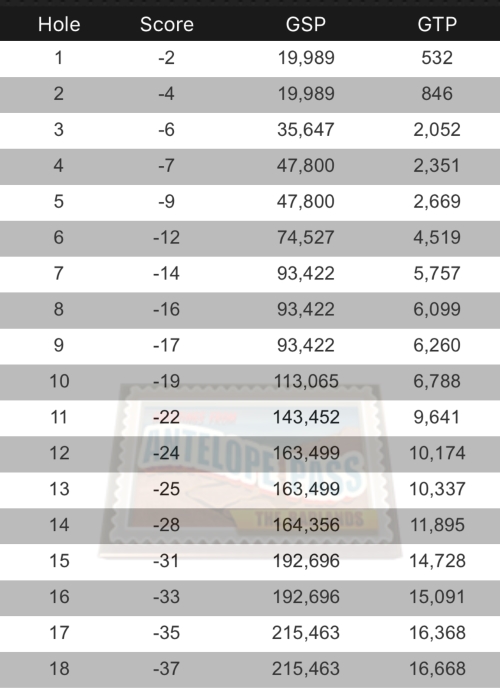 “I knew there were some opportunities to score,” Haas said. “I just never imaged that all of these shots would fall in the same game. It was a dream round.”

The round include five holes-in-one and four double eagles. For some added perspective, he birdied only three holes.

There were a handful of close calls sprinkled in as well. His shot on Hole 4 was “very close.” He also gave Hole 9 and Hole 11 a good run. Hole 13, one of the easier looks of the round, just didn’t fall.

“It was a short wedge on 13, and I just got stuck trying the wrong shot,” Haas said. “By the time I realized it, I wasn’t in a position where I wanted to change anything.”

To help Haas conquer this particular setup on Antelope Pass, he used Grabber golf balls and also created a bag specific to the look. The bag, which can be found below, was extremely heavy on fairway woods. 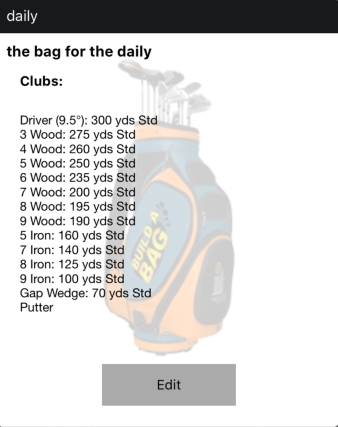 “The 8-wood was just perfect for the 17th hole. I really liked that club on the par-3,” Haas said. “That was the only change I made to the Build-A-Bag I usually use on Antelope. I substituted the lob wedge for the 8-wood because I knew that shot could be done.”

Yeah, he didn’t need an L-wedge for this round anyway. Not this round.

After he used his 8-wood to ace 17, Haas took the tee box on Hole 18 sitting at -35. Even for Haas—a player with tens of thousands of round under his belt, some of which in the most pressure-packed situations, he could feel things kick up a notch here.

“Don’t muscle spasm and crash into the back wall. That’s what I was thinking,” Haas said, breaking into laughter. “There were definitely nerves. I’ve played a lot of Golden Tee and never been in that position.”

Haas avoided hitting the back wall and tapped in his eagle putt.

The final result: a -37. It’s the lowest score ever recorded on the game. His previous record didn’t last long.

The 215,463 Great Shot Points he closed with is not a record, although it’s an absurd number. The 16,668 Golden Tee Points is simply off the charts. We may never see another number like it again. 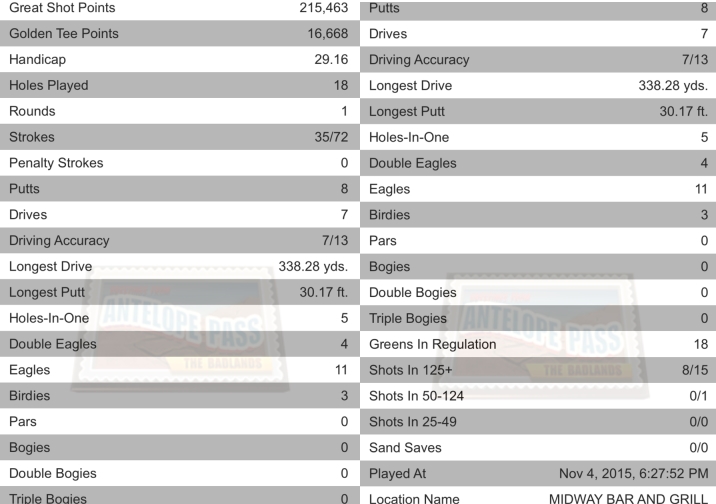 Then again, we may never see another round like this again—when everything comes together to this degree for 18 holes. But we’ve done this part, too. We’ve said this before.

Back in June, I gave you this exact same speech about that once-in-a-lifetime round. So what about that -38?

Of course it does. All of it does. But then again, it’s hard to capture what has already taken place. Here we are once again talking about conquering the unconquerable.

It has to be said—even if he won’t say it. At this point, it’s tradition.

Perhaps a -38 is closer than we think…