NEWS
We Made It
Golden Tee LIVE’s Two-Millionth Contest Has Officially Been Played
http://twitter.com/share
Prev News | Next News 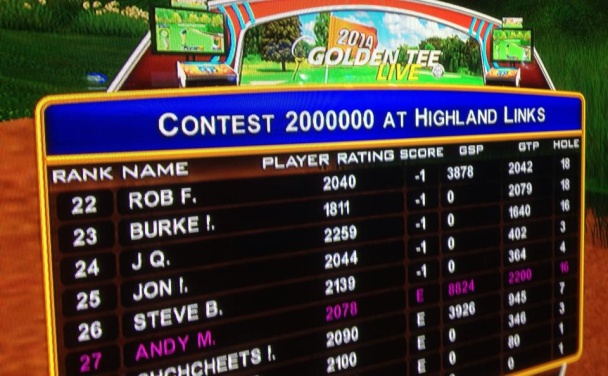 Now this is a Golden Tee milestone. The two-millionth LIVE Contest has officially been played.

Think about that for a moment: TWO MILLION.

The monumental contest occurred on Highland Links in a Prize Play Pro Bracket. The winning score was -14 and it came from Sharoll Wilcox—aka “Hoopie”—playing at Pepperoni's Tavern in Alpharetta, Georgia.

Congrats to Sharoll on the victory!

As an added bonus—and to celebrate our 25th anniversary of the game—all players in the contest have been rewarded an extra $25 in their Player Account. It doesn’t matter if you finished fiftieth, fifteenth or fifth, you’ll walk away with a little added something extra for finding yourself in the right place at the right time.

It’s not just those of you who we’re in the milestone contest that make this special, though. It’s the dedication from the countless fans—such as you—around the world that has made this all possible.

Thank you for being a part of the two million contests, and here’s to the next million. And the million after that. And the…