NEWS
A Time For Giveaways
Thanksgiving Gear Plus More to Come—a Week of Golden Tee Giveaways is Upon us
http://twitter.com/share
Prev News | Next News 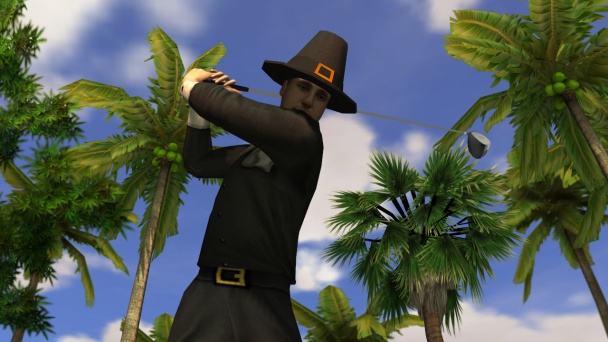 Thanksgiving week is upon us, which means you absolutely must hit the treadmill early and often. After that, well, nutrition and responsible eating will go out the window for at least a day, but probably a bit longer than that.

When you’re not on the treadmill, however, you’ll probably be at the bar playing Golden—after all, this is a workout, too.

And if/when you get your games in this week, we’ve got the perfect treat for you.

On Wednesday, we will be releasing a new Giveaway Code for Golden Tee 2013 and getting a jump on your holiday shopping season. Be sure to tune in for that and also make sure you’re decked out in our classic pilgrim gear.

It’s the few presents this week that you will not have to wait in line for.

To enter the code simply hit the "Options" button at any point during the game and highlight and select "Give Away Code.

After doing that, you'll then be prompted to enter a 10-digit code to receive the Thanksgiving clothing items. From there simply type in 13FEEDF00D (a one, a three, the word "feed", followed by the letter "F", two zeros, and the letter "D") and you will receive one of two items! The giveaway code may be entered twice to receive the pants and shirt, and you should already have the pilgrim hat which was released in 2008.

Happy bird shopping and tune in for a NEW Giveaway Code on Wednesday!