Golden Tee’s first tournament of the year is nearly upon us.

Although the Florida Open is now less than two weeks away, there’s still time to be a part of 2012’s first must-see GT.

The Florida Open will take place on Thursday, February 9th through Sunday, February 12th at Mugshots Bar and Grill in Altamonte Springs, Florida. This is the first event on Power Events’ PEGT Tour – a yearlong GT tour that will once again conclude in Dallas with a final Player of the Year tournament. Last year’s tour was a smashing success, and you can expect the exact same results as they embark on a new year.

Festivities get underway on Thursday with a closest-to-the-pin tournament. Entry into this pre-tourney event is just $10. On Friday, a match play handicap tournament will take place and entry into this event is $25. As if you needed an excuse to come to Florida for an extra few days, you now have one.

At noon on Saturday, the Florida Open will commence with a five-course qualifier. The thirty-two players to shoot the best overall scores will then be placed in the championship bracket, while those that don’t make the cut will be placed into the purple bracket. Match play for the tourney will begin on Sunday morning, and the first tournament champion of 2012 will be crowned later on that day! 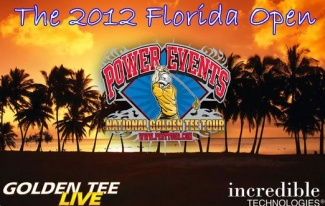 Although February 9th is right around the corner, there’s still time to sign up. All tournament participants will receive a special customized Golden Tee Player Card (similar to image on right) just for playing. Entry into the tournament is $100.

This promises to be a good one, and if you’re in the area or looking to attend your first GT tournament, this would be a great place to start. The weather isn’t such a bad thing either.

Visit the official Florida Open Tournament Thread on Underdogsports.net for more information or to sign up for the event. Also be sure to visit Power Events' official website for information and dates on other PEGT Tour events in 2012.

We’ll have a full recap on the event once the players duke it out for the title. Stay tuned to Goldentee.com for more!