NEWS
Thanksgiving Reminder
Do You Have the Pilgrim Outfit That Debuted a Year Ago? If Not, Get it Here!
http://twitter.com/share
Prev News | Next News 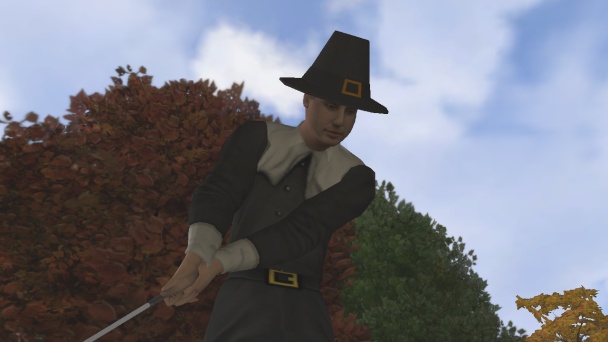 Thanksgiving is a time for family, a time to be thankful and a time to stuff one’s face with food beyond comfortable levels. It’s also a nice break in the action that usually comes with plenty of downtime beyond the massive Turkey Day meal.

Your favorite game goes well with downtime, and hopefully you have plenty of it. And although GT 2012 doesn’t have a new Thanksgiving lineup of clothing, there are two items that might be new to some of you who missed out on it in Golden Tee 2011. Last year we debuted the pilgrim outfit in the game, and we want to make sure your virtual golfer is ready for the long weekend. Most of you know the drill by now, but for those that don’t here’s what you should do.

To enter the code simply hit the "Options" button at any point during the game and highlight and select "Give Away Code."

After doing that, you'll then be prompted to enter a 10-digit code to receive the Thanksgiving clothing items. From there simply type in 13FEEDF00D (a one, a three, the word "feed", followed by the letter "F", two zeros, and the letter "D") and you will receive one of two items! The giveaway code may be entered twice to receive the Thanksgiving shirt and pants, so be sure to enter it twice!

The pilgrim hat - number 66 in your clothing collection - was given away all the way back in 2008 and completes the Turkey Day clothing ensemble. Be sure to throw that on to rock the full pilgrim look.

Enjoy the gear, enjoy the food and happy Thanksgiving from Golden Tee!