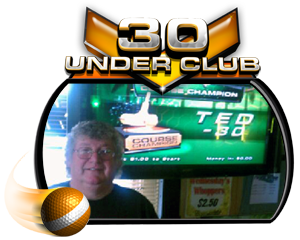 Once is an occurrence. Twice is trend. Three times? Well, that just flat-out doesn’t happen.

Apparently, however, it does.

For the third consecutive week a PowerPutt player from The Jim in Weston, Wisconsin is being added to the 30 Under Club. First up was Richie Kersten, next was Roger Priebe and now Teddy Williams is getting enshrined. To say that this location is en fuego would be a massive, massive understatement.

Congratulations to Teddy on his fantastic game and to the trio from The Jim for one heck of a stretch.

For those of you that play outside of the state of Wisconsin, we want to hear from you, too. Have you hit a –30 but aren’t in the club yet?

Email a photo of you in front of the game with your score in the background to IT, along with your name, mailing address, and the location you played at. You will then be added to the hallowed halls of the Thirty Under Club!

Good luck and we hope to hear from all of you soon!