NEWS
2022 Golden Tee World Championship Wrap-up
From the ranks of GT's elite, our champions have emerged, and history was written.
http://twitter.com/share
Prev News | Next News 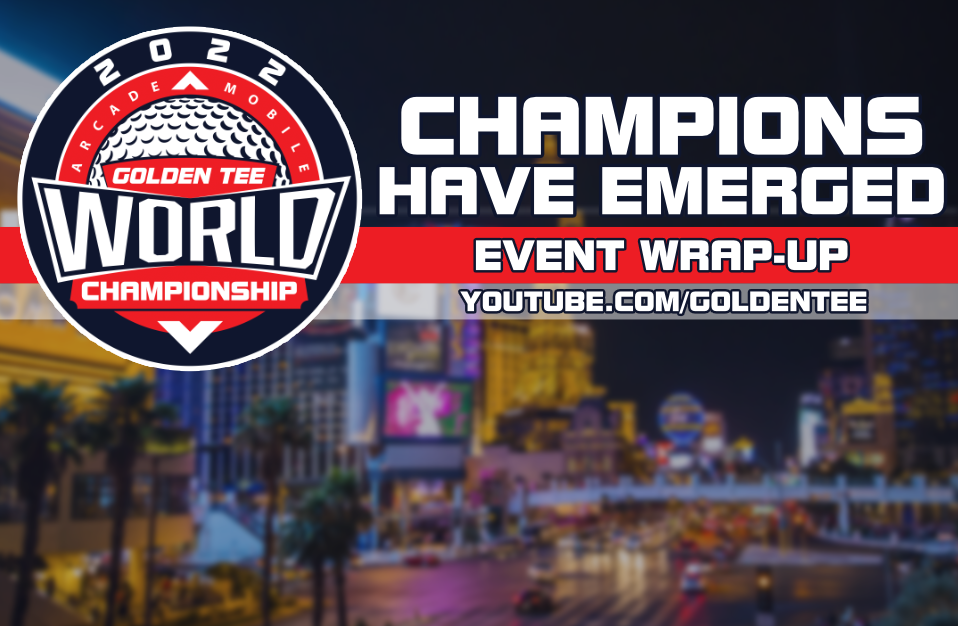 The titans of the touchscreen and the trackball converged in Vegas last weekend, in the pursuit of a shared goal...ultimate glory, and the title of 2022 Golden Tee World Champion. After four days of intense competition within this field of GT elites, our champions have emerged, and history has been written. 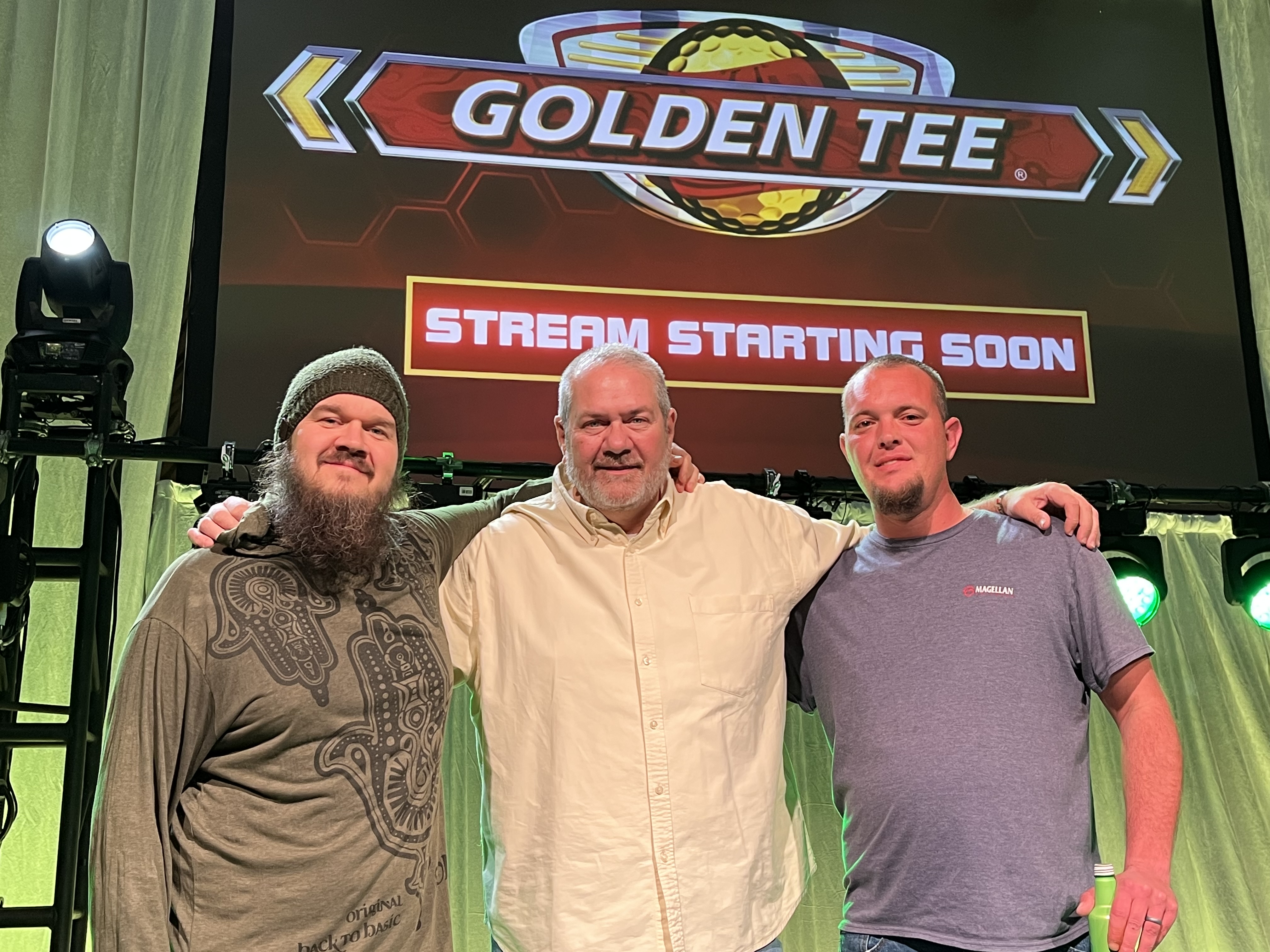 The top 16 of Golden Tee Mobile completed their qualifying rounds and faced off in bracket play on Friday. Banaments, who qualified for the main event the previous evening, battled his way through the competition, making his way to the Grand Final. 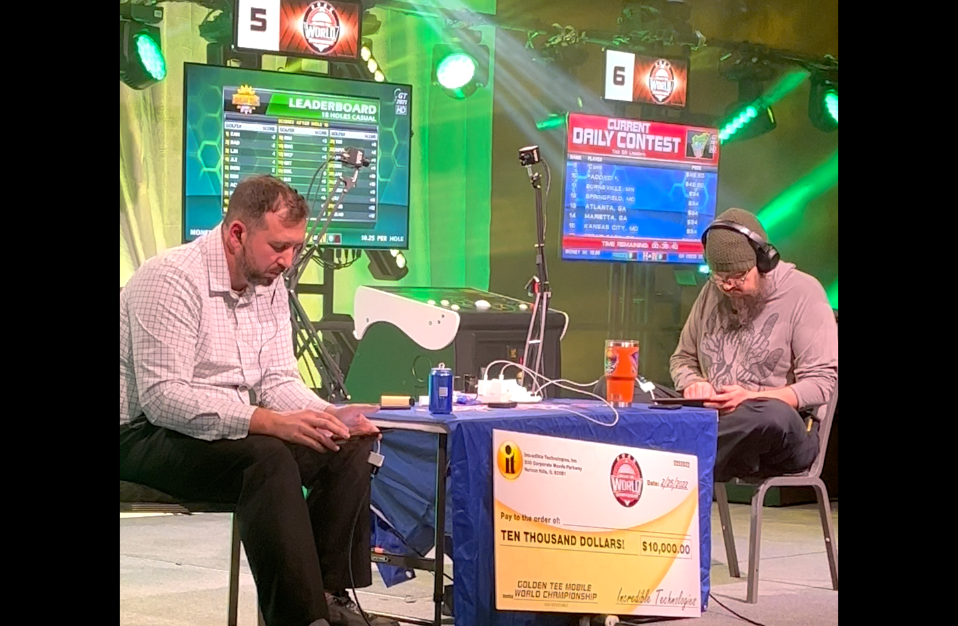 GTM behemoth, Swipersniper2 (Rick Copithorne), and Banaments played through 18 holes on Tundra Peak, resulting in a tie score of -27, and a sudden death contest that would go on to be decided by a single hole. Rick Copithorne hit an absolutely amazing hole out on 10 at Tundra Peak, claiming the title of 2022 Golden Tee Mobile World Champion and a grand prize of $10,000. 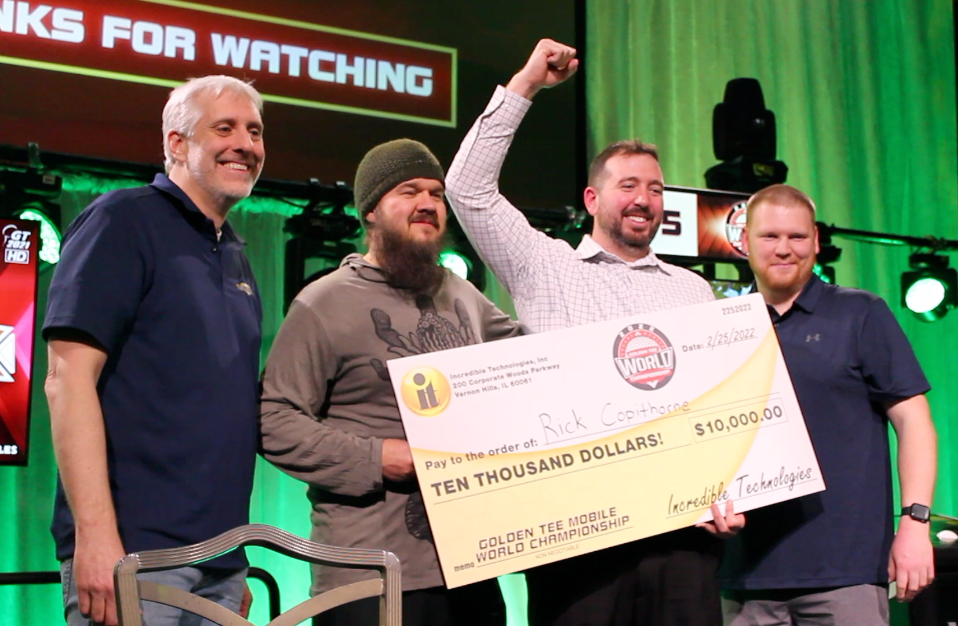 Friday events continued late into the evening and early morning in Vegas, with the 2022 Golden Tee Arcade World Championship Closest-to-the-Pin qualifying event. TEN main event spots were on the line, and players came out in droves for the opportunity to square off against the best Golden Tee players in the world in the World Championship qualifier, and ten lucky hopefuls went on to qualifying play on Saturday. 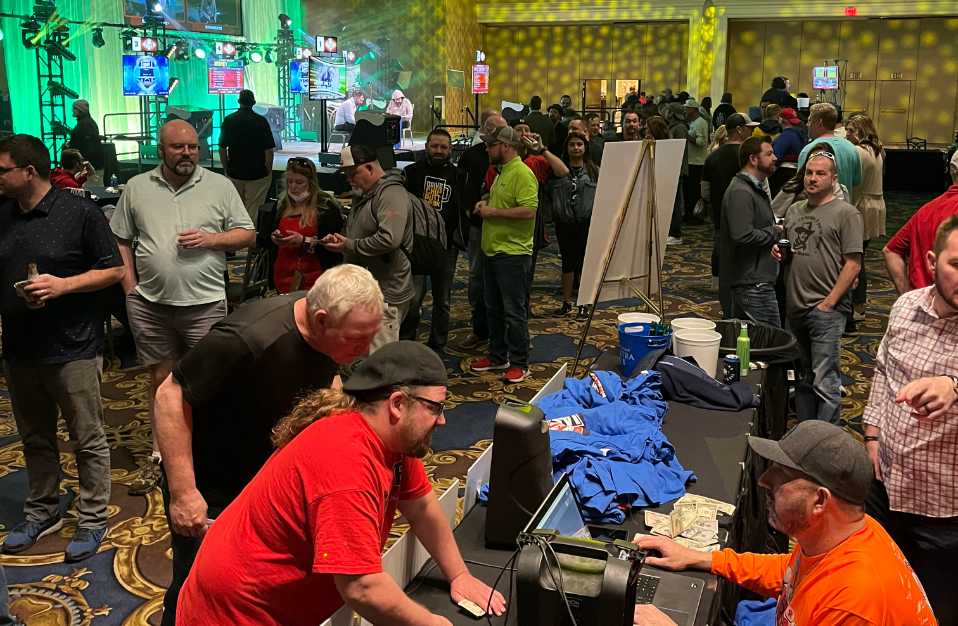 The line for CTTP registration on Friday. Turn out for this event was incredible.

By early Saturday morning, the pavilion was alive with players at twenty 2021 Golden Tee Arcade machines playing through 2021 courses in preparation for the five game qualifier they would be tasked with completing later in the day. It seemed to be a sigh of relief for some of our veteran competitors, and a call to action for others. The first major hurdle in the chase for the title since qualifying over a year ago in some cases, or as little as hours for CTTP entrants.

One by one they played through the courses, weighing every stroke against the players in their group, and the mass of games being played on other machines, by other competitors, each potentially performing better or worse than their expectation of themselves. It was a relatively short day, and one that ended with little fanfare, when held up to the rest of the weekend, but a grueling one none the less. The brackets were set, and we were just hours away from Championship Sunday.

Players were inside the pavilion before open play was set to begin at 9AM PST. Within minutes, every game was in use, and players scrambled to group up at machines in an effort to get those final practice rounds in before the main event. 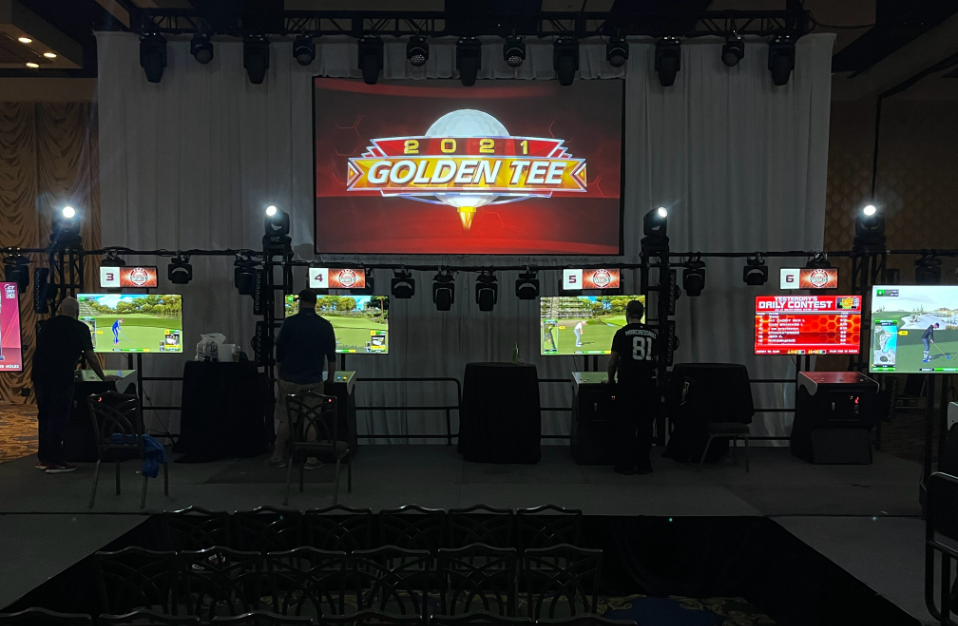 The calm before the storm. Players practice in the early hours of Championship Sunday.

The competition was intense, and shocking at times. Within the first round of play, several favorites and veterans were sent to the elimination bracket, including the number one seed in Gold play, Evan Gossett. Similarly, Andy Fox, CJ Wengler, Andy Haas, and Joe Massara found themselves in the same set of circumstances, and the matches that followed on this Championship Sunday offered as much drama and energy as these early upsets introduced.

There's so much to cover in these incredibly dense and electric hours of competition, with so much of it worthy of its own time in the sun, that we'll be revisiting Championship Sunday (and other highlights and happenings) with several more focused and detailed pieces of content in the weeks to come. Keep an eye on LIVEWIRE and our social media channels to catch all of our post-Worlds coverage. 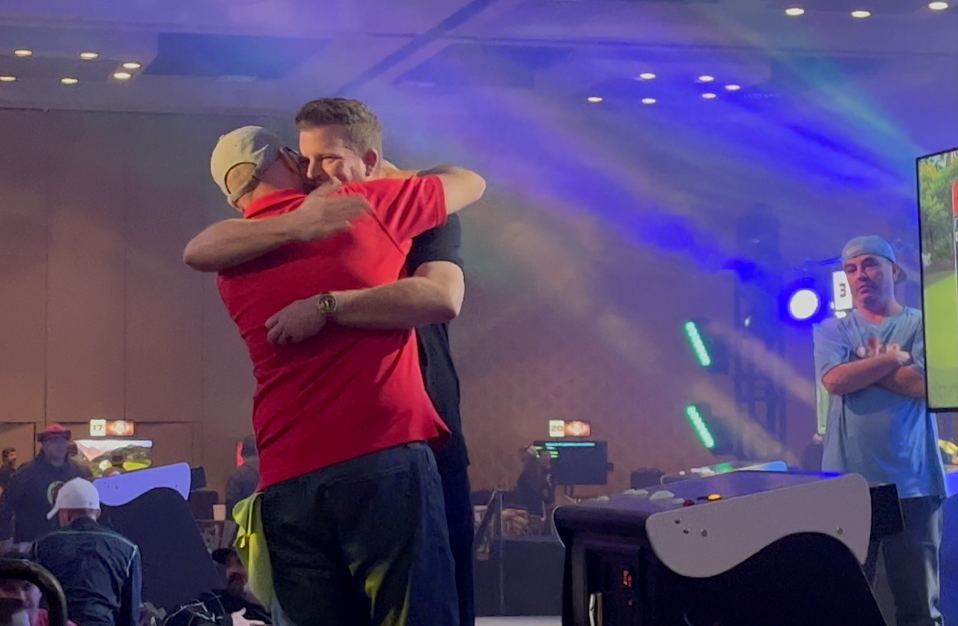 Bryce Leppek and Ryan McCook share a moment after their match in top 8.

Orlando Ayala met PEGT title holder, Sean Gervais, in the Grand Final of the Silver bracket. This, after being sent to the elimination bracket by Gervais in a top-16 match, and fighting his way back to a second meeting with the veteran of high level competitive Golden Tee.

Sean Gervais would emerge victorious on Pine Creek to claim the 2022 Golden Tee Arcade Silver Bracket, further cementing the respect and admiration that he garners within the community.

Check out the final standings of the Silver bracket below. 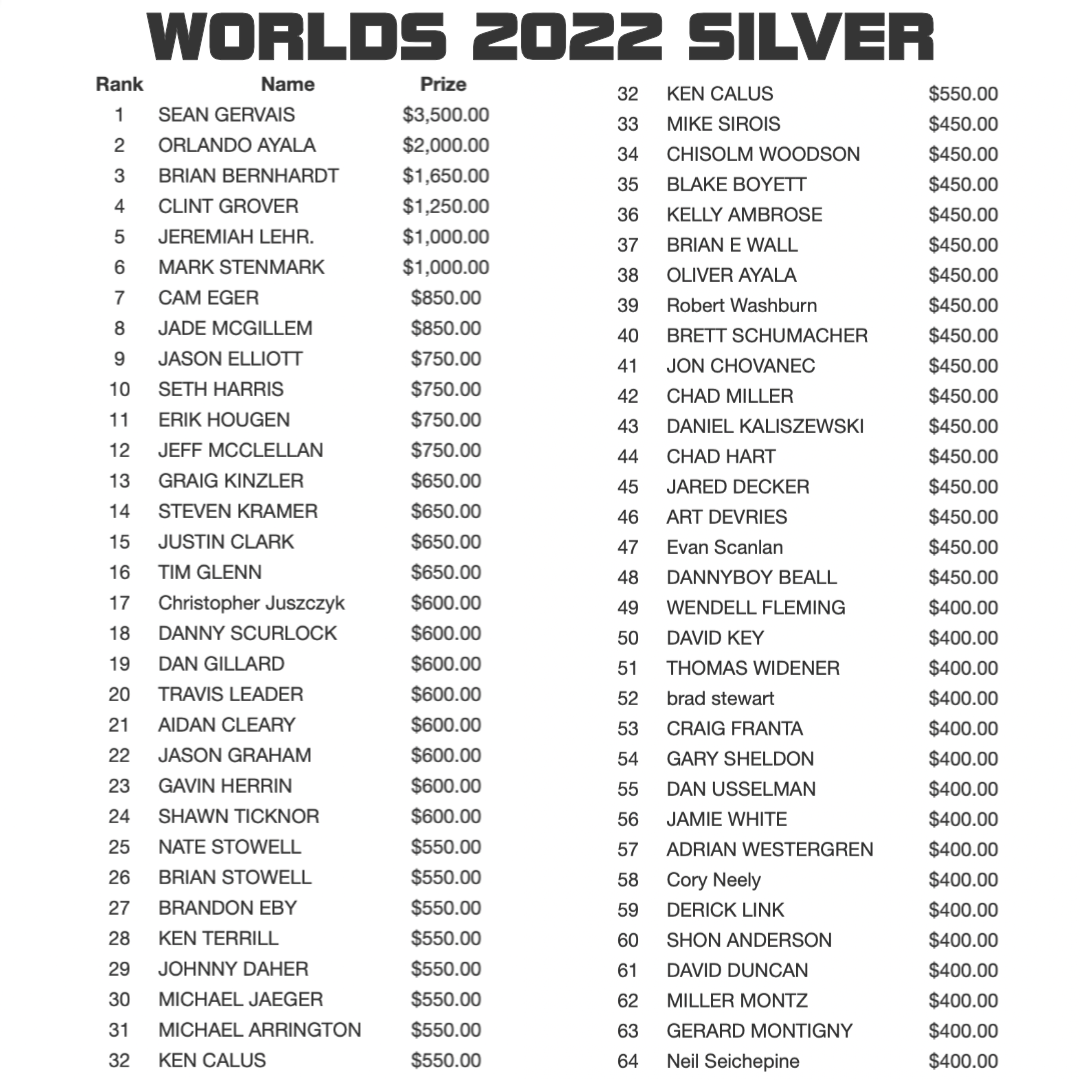 After an absolutely stellar set of performances from Banaments, Lance Harris earned a place at his second World Championship Grand Final event of the weekend. This time he found himself squaring off against the ever-present Paul Anthony Luna. 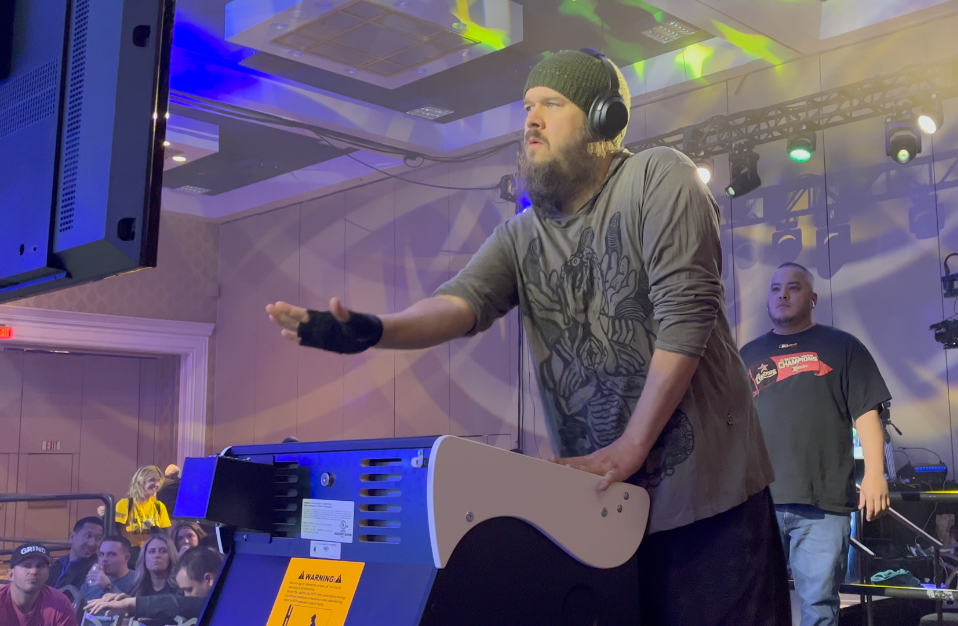 After 18 holes on Anse Cocos, Paul Anthony Luna emerged victorious as the 2022 Golden Tee Arcade World Champion, and deservedly so. His dominance over the competitive Golden Tee scene has been a looming force, known to all, feared, and respected. As he expressed in his words to the crowd after earning his crown, "I guess it's my time now." 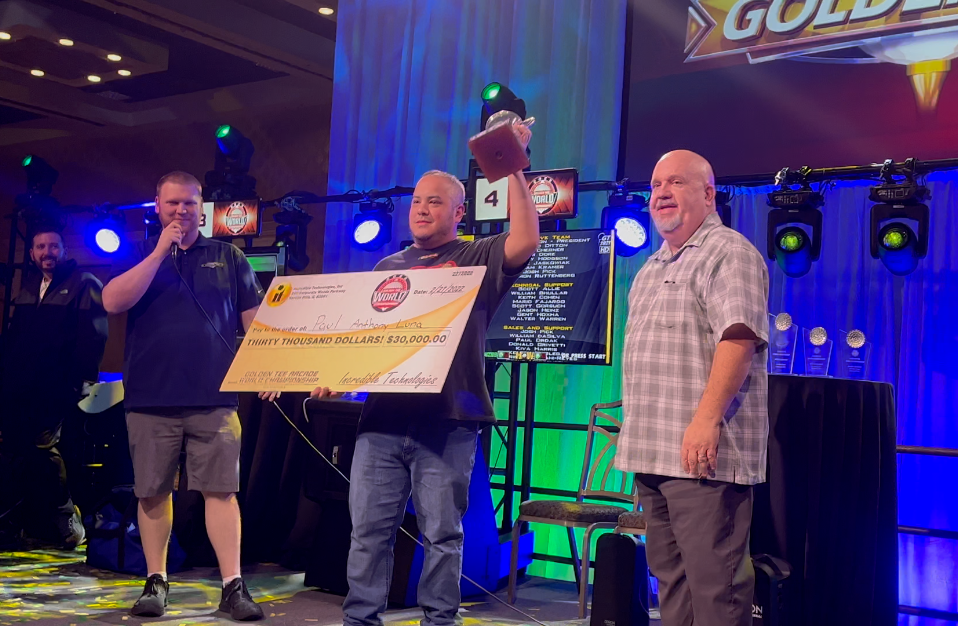 Lance Harris finished second in the 2022 Golden Tee Arcade AND Mobile World Championship events. A true feat all its own, and a story sure to be retold again and again wherever the trackball rolls. Banaments is a name that will forever be synonymous with achievement and sportsmanship. Kudos to you, sir.

Here are the final standings of the Gold bracket. 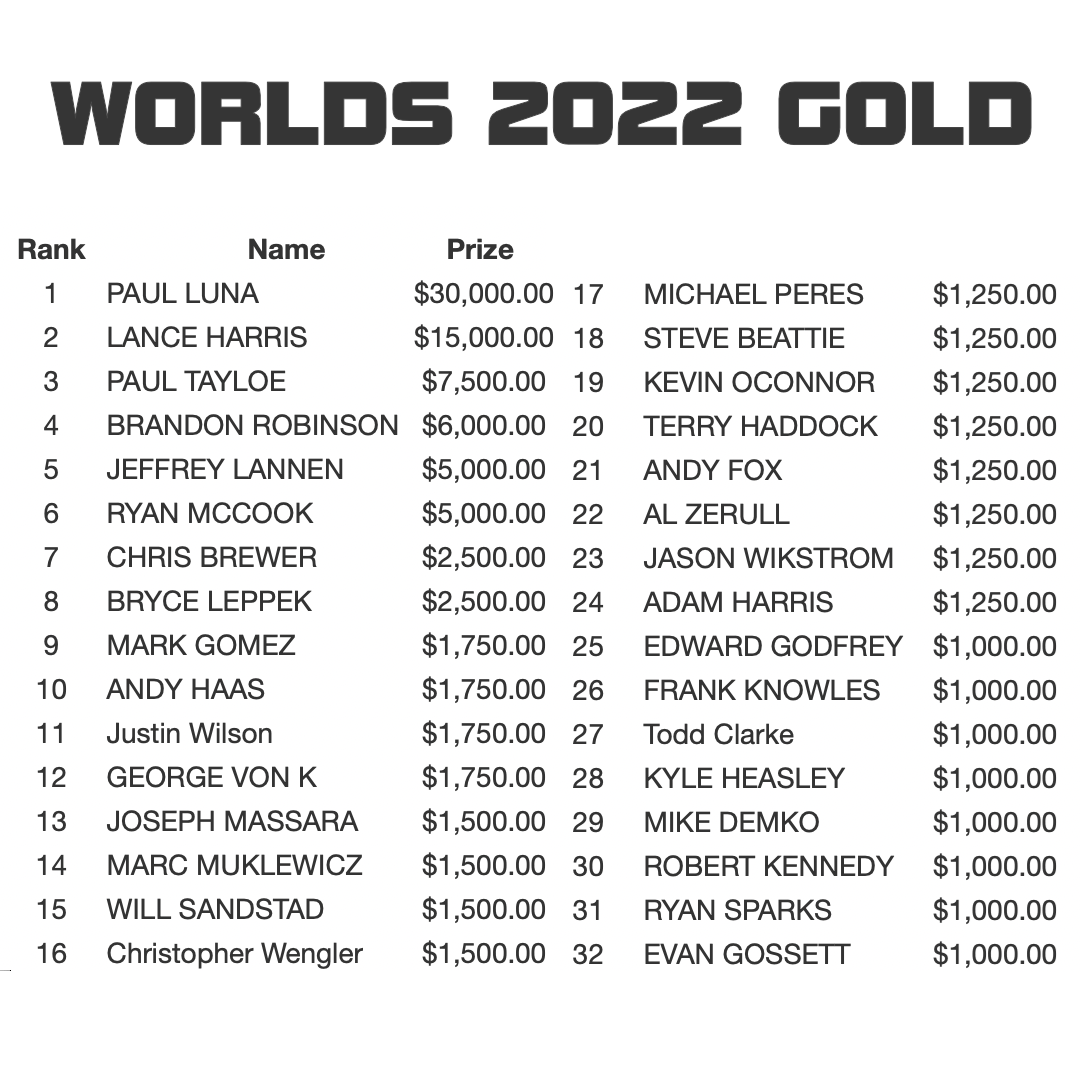 The 2022 Golden Tee Arcade and Mobile World Championship has come to an end. It was truly something special. Our deepest congratulations to our 2022 champions, and everyone for their accomplishments leading to this event. We come together to celebrate our shared passion for the game, and to celebrate the talent among our ranks. But it doesn't end there. It doesn't end with a handshake at the cabinet or a beer after the round. We find solace in this sport and in our community, realizing the potential of bonds formed around video golf. Thanks for coming out, friends.