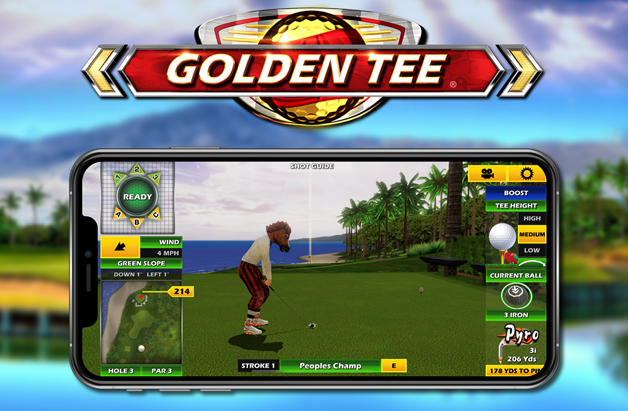 If you feel like you don't have enough Golden Tee Golf in your life when you're away from your favorite cabinet and location, then we might have the best solution for you!

The mobile Golden Tee Golf game officially launches in the United States for Android and Apple devices in less than a month on October 28th!!

With successful launches in Ireland, the United Kingdom and most recently Canada, IT is thrilled to annouce the launch of Golden Tee Golf's app game to our largest fan base and audience in the United States.

“Our goal is to introduce Golden Tee to an entirely new audience—younger players who didn’t necessarily grow up playing the game,” said John Noble, Golden Tee Golf Project Manager. “The core of the game should look and feel very familiar for many. But we’re also excited about some of the different things this game will introduce that will be new to the franchise.”

The app will launch with six nine-hole courses made up of the front and back nines of locations players may be familiar with; Desert Valley Resort, Juniper Falls and Volcano Palms!

Players can compete against other golfers in real-time contests, refine their skills in Challenges or Campaign Mode and score rewards in a feature called the Daily 9.

The app offers players opportunities to earn in-game currency, which they can use to upgrade their clubs, balls and apparel. New to the franchise are “Boosts,” which allow players the option to upgrade their equipment quickly and easily.

“This isn’t just a game that fans of the franchise or golfers will enjoy,” said Golden Tee Golf design lead Adam Kramer. “Like the arcade game, this is an experience that will resonate with so many different people. And we’re just scratching the surface on what we have planned.”

There is still plenty of fun and exciting content that we haven't announced yet and are planning for the future.  The mobile game in an extension of this brand into a new world and we couldn't be more excited for it!