NEWS
Recapping the 2018 Florida Open
2017 POTY Andy Fox makes quite the run in the first national event of the year!
http://twitter.com/share
Prev News | Next News 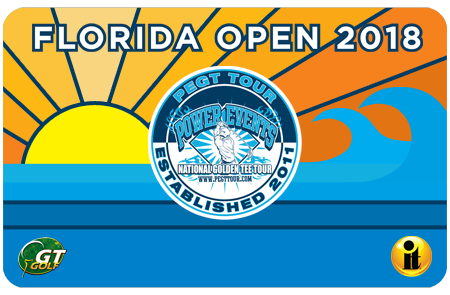 It was an amazing tournament this past weekend at the 2018 Power Events’ Florida Open!

Over 80 players played in multiple events between Thursday and Sunday for the first national tournament of this year.

We kicked things off at Sideline Sports Grill with the Closest to the Pin contest on Thursday with over 30 players entered. Missouri’s Evan Gossett took 1st place, while honorary #TeamWisconsin member Clint Grover took 2nd, and South Carolina’s Chris Brewer and Chris Longino rounded out 3rd and 4th place!

By the time real golf was over on Friday, the handicap tournament got started with 71 total players in this tournament.  For many, the goal was simple.  Win at least two games against your opponent with the scores based on your GT handicap, and you can win a free entry into Saturday and Sunday's main event.  Out of the 71 players, 16 did just that and saved themselves $100 in entry fees!

By Saturday morning, 83 players were at Sidelines Sports Grill in beautiful, warm and sunny St. Cloud, Florida, for our main event qualifier.

This qualifier had an interesting feeling to it; for the first time in PEGT history, players were unsure which 5 current courses they would be playing on.  With re-imagined course Rattlesnake Ridge added to the mix (and eventually Mystic Hills come March 1st), Rattle had the possibility of being randomly selected and brought into the mix.

With the luck of the draw, Rattlesnake Ridge joined Safari Dunes, Calypso Key, Mayfield and Royal Dubai for the five course qualifier

After a few hours of qualifying over sixteen Golden Tee machines, the field was set and Paul Tayloe took place with an overall qualifying score of -146, a 7 stroke lead over the number 2 seed, 2017 Player of the Year Andy Fox!

With the Top 32 Gold Bracket set, the remaining 51 players were sent to the Purple Bracket for Sunday match-play.

When Sunday rolled around, every player in Sidelines was focused and ready to get match play started.

Top qualifier Paul Tayloe was able to take down local Shaun Kennedy in his first match, Texas' Chad Hart in his second match and Chris Longino in his third match.  Unfortunately, this is where the top qualifier's winning streak ended, as he was sent to the loser's bracket by Sean Gervais, who was on his own path towards vying for undefeated King of the Hill.

After losing to Gervais, Tayloe suffered his elimination loss against "The Mouth," Marc Muklewicz, -27 to -26.  With that loss, Tayloe finished in the 5th-6th spot alongside Golden Tee's own marketing coordinator, Kevin Lindsay.

2017 Top Gun Player of the Year Andy Fox was carving his own path to success on the other side of the Gold Bracket, taking down PEGT's Russ Layton, Mark Lepich and Florida local Ke Wu with multiple 29 unders.  His next victory over Missouri's Dan Wies placed Andy Fox in the King of the Hill match against Gervais.

After taking out the top seed of Paul Tayloe, The Mouth then went on to face Dan Wies in a match that Mouth won in impressive fashion of -29 to -28.  Wies took 4th with that loss.

Sean Gervais was the next one to face-off against the most recognizable face in the room, where they battled on Safari Dunes in a game that saw Mouth lose a stroke on the drive-able par 4 Hole 13 and never able to come back.  Gervais heads to the finals with a score of -28 to -23.  If you'd like to see that match in its entirety, you can check out Golden Tee TV on YouTube.

In a pattern that we have seen develop over the last few tournaments, the loser of the King of the Hill match always seems to fight their way back to the final match of the tournament.

Undefeated Andy Fox took on Sean Gervais in the final battles of the 2018 Florida Open.  Gervais must defeat Fox twice in order to claim the title of Champ.  All Andy has to do is defeat Gervais in one match and the title is his.

After posing for a few photographs, the match was ready to go.  The players both elected to hit the random button and they landed on Royal Dubai.  With Hole 1 looking potentially drive-able, we're going to let the videos speak for itself.

In the end of two very intense games of Golden Tee, the 2017 POTY Andy Fox is starting the year off right as the 2018 Florida Open Champion!

Big thanks as always to Power Events' and their entire crew, along with Richard King and Golden Tee TV.

A shout out to Chris and his staff at Sideline Sports Grill for another year of amazing hospitality and service!  We can't wait to see you again next year!

As for the rest of you crazy Golden Tee players, we will see you next month for the 13th annual Wisconsin Open; now a part of the Power Events Golden Tee Tour! 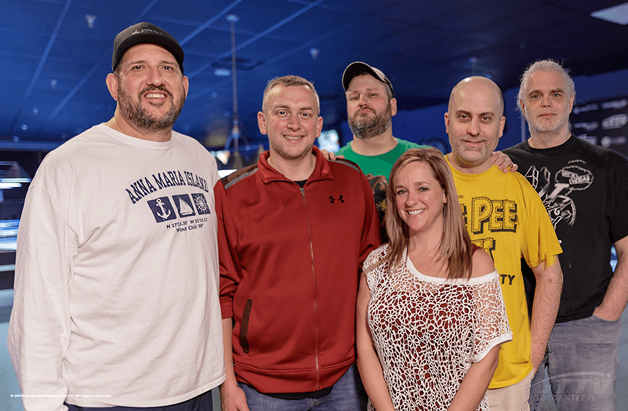