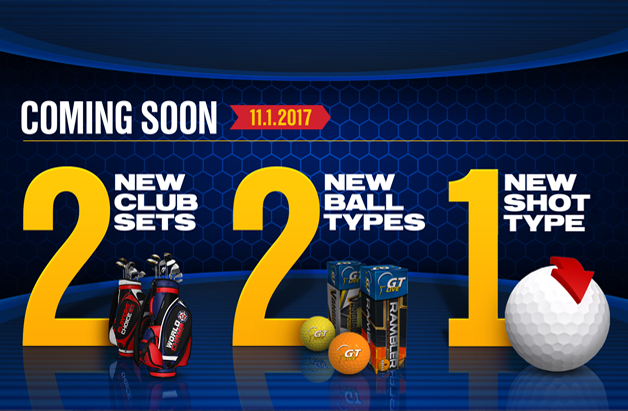 We’re calling it Launch 2.0, which says just how much is about to change. On November 1st, Golden Tee 2018 will celebrate the first of many midyear additions.

And it’s not just one thing. Starting on Wednesday, we are going to give you more ammunition to attack pins and holes. We’re going to give you a brand new spin type. That’s right, a new way to play Golden Tee that was not available in the previous 29 years.

New Spin Type! (Release): We’ve talked about it for months, and the day has finally arrived. Release is the fourth spin type in Golden Tee, and it will allow you the ability to be selectively aggressive when you attack pins.

Consider what “Roll” would look like if it had 50 percent the power and you’re getting closer. For shots that demand aggression but also require control, this is a wonderful and useful option to have.

(Spoiler: It also works extremely well on chipping.) But you'll have to try it for yourself!

Two New Golf Club Sets: The People’s Choice and the World Champions set will be available for purchase on all Golden Tee 2018 cabinets come November 1st as well.

To build the People’s Choice set, we took data from all clubs owned/purchased to determine what was most popular and incorporate these choices into one bag. Our Golden Tee World Champion, Mark Stenmark, had the honor of creating our other set.

No matter what you choose, know this: these are sets that have been approved by the people. Or in the instance of Stenmark, one of the best Golden Tee players in the world.

Two New Golf Balls: Joining the golf clubs are two new balls that are explained in detail here. The Rambler and Vanguard each have their own unique, friction-altering technology that change the way the balls will behave on the green.

If you have been looking for new boost to your game, perhaps you don’t need to look much farther. Like the new clubs, the balls will allow you a new way to tackle the various game modes and courses within Golden Tee.

So there you have it. Three new reasons to play Golden Tee, all debuting on the first day of November. And that’s not all. We still have TWO new courses to celebrate, coming your way in the weeks and months to follow.

Enjoy the spin and the gear!