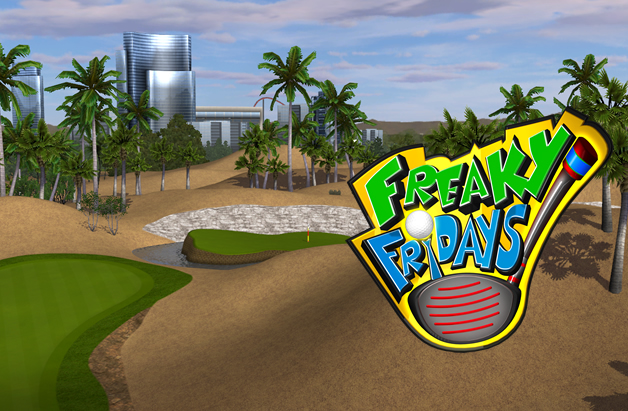 Although this weekend will be filled with all kinds of Las Vegas fun during the 2017 Golden Tee World Championship, the action on the courses doesn’t stop.

In honor of the World Championships being held this weekend in Vegas, we are featuring the 2015 course Desert Valley Resort.

But, this isn’t the Desert Valley that you’ve played on for the last few years.  This is the Vegas Mixer Freaky Friday edition where all the holes have been randomized. Until you head to your local watering hole and fire up a Daily Contest game on Friday, you won’t know whether you are teeing off on Hole 1, Hole 12 or Hole 18!

Even though the major action of the World Championship weekend doesn’t kick off until the Closest to the Pin contest at 6pm PST on Friday, there’s a good chance that Adam Kramer and Kevin Lindsay will be bringing you a live breakdown of the course on the Golden Tee Facebook page.

Don’t forget, the 2017 Golden Tee World Championship is this weekend in Las Vegas and we will be streaming all weekend! Use #GTWorlds17 to join in on the action on social media. If you’re in the area, visit the Hi Scores Bar-Arcade in Las Vegas (not Henderson) and see the action for yourself!