NEWS
And So It Begins
Qualifying for the Golden Tee World Championship Kicks Off Sunday, January 15!
http://twitter.com/share
Prev News | Next News 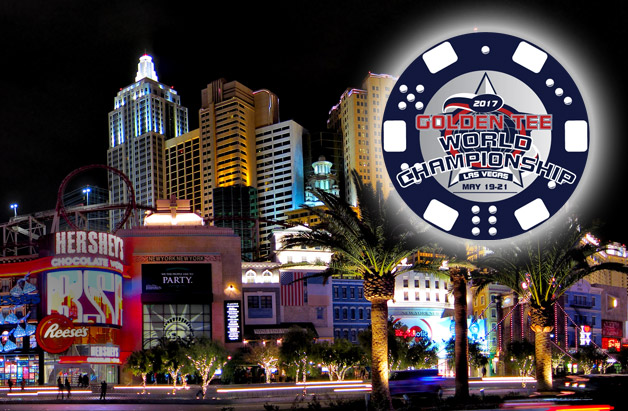 This is what you’re playing for. The Winner of the 2017 Golden Tee World Championship will take home the $10,000 top prize. This individual will also have his (or her) head as a selectable option in Golden Tee 2018. He (or she) will design a club set—The Champions Set—in the next update to be played and celebrated by the masses. And yes, our champion will also design their own Freaky Friday course—a custom 18-hole Daily Contest experience—to debut this summer.

The Golden Tee World Championship, the most celebrated event in the game’s long history is back in 2017. The latest installment will take place on May 19 through May 21 at Hi Scores Bar-Arcade in Henderson, Nevada—in the shadows of the Las Vegas strip. The event will feature more than $70,000in prizes, surprise giveaways, a Closest-to-the-Pin welcome event and more.

The field will be locked at 64 players, and the main event will be double-elimination and begin that Saturday, May 20. While there is still so, so much to get to when it comes to the LIVE final event, you need to know the most important thing first: How to qualify.

Between January 15 and March 15, players can qualify for the 2017 World Championship on any online Golden Tee 2017 LIVE cabinet.

In this two-month span, the 50 players with the combined lowest average score from Prize Play games across all five 2017 courses will qualify. Essentially, we’re looking for your 10 best games on each course—not just your 50 best scores. All five courses will be equally weighted.

We will then take your average scores across all 50 games (10 per course) and tabulate your total Great Shot Points, which will serve as a tiebreaker. That will be how you will earn a spot on the leaderboard.

The 50 players with the lowest combined scores will earn a spot in the Golden Tee 2017 World Championship.

Please note: Only Prize Play games will count toward average score and a player must check-in with the same player ID/profile across all games. (Aka swipe the same card, insert the same pin, use the same character.)

Live in a state that does not allow Prize Play? We have you covered as well. The same format above will also serve as the qualifier for players outside traditional Prize Play states—specifically Alaska, Louisiana, New Jersey or South or Dakota. Between January 15 and March 15, the same 50-game format/rules will apply, but competition takes place in 50-man online contests.

The top three finishers across these states—the players with the highest 50-game average—will secure their spots in the tournament as well.

Please note: these three qualifiers must be a resident of the state that they qualified in.

There will be two separate leaderboards available for each contest; both of which will launch on Monday, January 16. Be sure to check back daily—these leaderboards should update every six hours or so—to see where you stand.

Six players have already qualified through live events and daily contests, and once March 16 rolls around, our field will be nearly set. We will give away the final two spots to Money $hot winners in events still to come.

But for now, it’s all about the 2017 courses. It’s about knocking out the 50 best games you can across two months.

Want a chance at Golden Tee immortality? Want $10,000? Want to design your own club set and Freaky Friday course?

You have your chance over these next two months.