NEWS
Fantastic Furyk
Announcing the Winner of #XR16GoldenTee Extravaganza; What a Weekend it Was!
http://twitter.com/share
Prev News | Next News 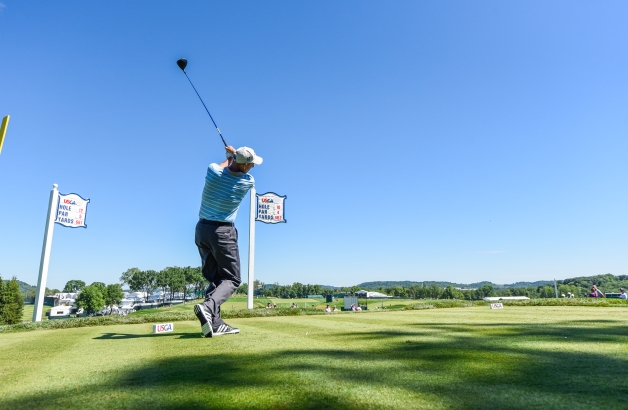 The premise of the contest was simple: Pick a Callaway golfer playing in the US Open, pick a score for said golfer, use the hashtag #XR16GoldenTee while tweeting at Golden Tee and Callaway Golf’s official Twitter handles and see what the weekend brings.

The winner would receive a Golden Tee Home Edition AND a signed driver by Master’s champion Danny Willett. Nice, right?

What happened next was anything but simple. There was rain, then more rain, then some tremendous golf, then the course firmed up and the golf got hard, then a debate over a strange ruling, then a tremendous close from a golfer with perhaps the most authentic swing in golf.

Perhaps we should have seen Jim Furyk’s close coming. After all, Furyk grew up in Pennsylvania and has Oakmont in his blood. Heck, he threw footballs and hit golf balls with Steelers quarterback Ben Roethlisberger at Heinz Field as a warm up.

A total of 18 Twitter users of nearly 400 submissions picked Jim Furyk to be the top Callaway performer of the event. Throughout much of the tournament, he felt like a longshot. Then Furyk fired a 66 on Sunday—the low round of the day—to push his final tally for the weekend to -1.

His efforts accomplished a few things. It gave him a tie for second place, which was an extraordinary accomplishment. For this particular contest, Furyk gave three individuals a chance at an enormous monster prize.

Four Twitter users: @CharlesJPorter, @mayeism, @tyleram75 and @EverettAid2911 picked Furyk to finish at Oakmont with a score of -2. Had it not been for a bogey on 18, they would have been right on the number.

On Monday morning, these four names were selected out of a Callaway hat to determine a winner. The user selected was @CharlesJPorter, which means a monster prize is coming his way. Congrats to Charles on a job well done!

As for our other finalists, they will not be going home empty handed. Each will be receiving a Golden Tee t-shirt and gift card along with a box of Callaway Golf Balls.

Thank you to everyone who participated. Needless to say, there will be much more fun in the future! Stay tuned to Goldentee.com and CallawayGolf.com for more!