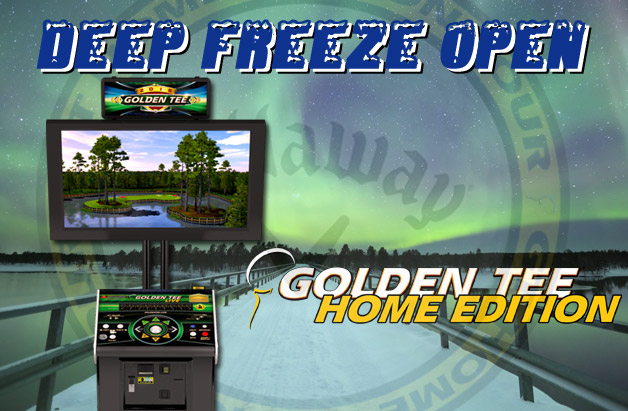 The latest installment of the Callaway Tour, our exclusive series of Golden Tee Home Edition events, has reached its conclusion. When it was all said and done, the Deep Freeze Open began its thaw.

The four-week qualifier in February slowly melted toward our magnificent five-course final in March.

For those that qualified, attempted to qualify and competed in the finals, we once again thank you for doing so. The energy and dedication exhibited by the Golden Tee Home Edition owners was, again, magnificent. It was a reminder of why these run these events.

Before we dive into the finals, let’s celebrate our random winners. Daniel Kaliszewski was randomly selected as the winner of the illuminated marquee. David Stout was chosen as the winner of the keypad. They won these prizes simply by playing 10 games each week. Congratulations to you both.

As for the results of the Deep Freeze Final, here they are. Each player was asked to complete a 2016 cycle—a game on all five of the 2016 courses. These results would then be tallied, and the winners would be listed in order.

Eric Manfredi led the scoring on Antelope Pass with his -27. Beyond his conquest, Tony Johnson really took over the cycle. Johnson posted the top score on Winding Pines (-28), Hawthorne Manor (-27) and Volcano Palms (-27). Johnson and Jason Wikstrom tied for the top score on Elkhorn Pass. Each posted a -28.

That bit of information seems like the perfect transition to the overall results. Johnson is indeed are Deep Freeze Open Champion with an impressive combined five-course score of -136. Dustin Hoehn was second with a score of -126, followed by Jason Wikstrom and Kevin O’Connor. Each posted scores of -119. 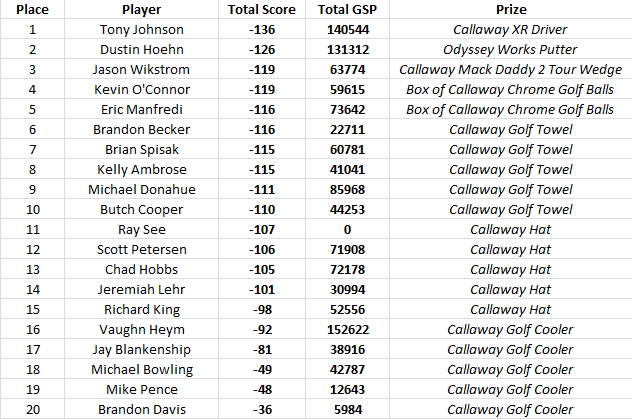 Congratulations to Johnson on the conquest and everyone else who competed. Although the Deep Freeze is done, the Callaway Tour is not. We are currently planning our next event, and we will have information on it soon enough. Prizes for all winners will be sent out soon.

If you would like to join in the fun, be sure to check out home.goldentee.com to learn more about the Golden Tee Home Edition and how you can bring the game to YOU.