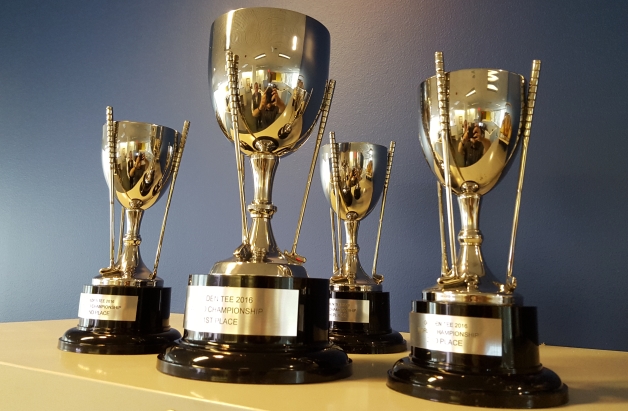 The trophies for the Golden Tee 2016 World Championship arrived on Thursday. Let’s start there. The top four finishers in the March 16-17 event in lovely Las Vegas will take home the lovely, suitcase-friendly shiny items above.

They are both elegant and somewhat simple in nature by design. They are keepsake for those who are able to maneuver through the 32-man bracket with the utmost care and precision. And then there’s the now infamous shot the World Champion will take with the special Hodgson-Zielinski Cup. One of Golden Tee’s most symbolic items will be coming out retirement and taking the trip to Vegas as well.

But these trophies, as good as they feel in your hand, are only the tip of the iceberg. Those who made it this far will be rewarded a great deal; those who make it a little bit farther will enjoy Golden Tee riches.

In terms of cash prizes, the Golden Tee World Champion will take home $10,000. Second place in the event is $5,000. No player, even those who leave without a win, will walk away with less than $750.

As an added bonus, the top eight finishers will walk away with the custom Golden Tee World Championship marquees that will be on display in Vegas on our eight cabinets. These images are specially designed for this event; they will be tremendous keepsakes in their own right.

The cash, of course, is lovely. As are the marquees. But the gifts do not stop there. The individual who wins the Golden Tee World Championship will also become a part of GT history. More specifically, they will become a playable character in Golden Tee 2017 and beyond.

After they have celebrated the win and held the trophy, we will take images on the winner’s head and face for the transition into Golden Tee. Once we return from Vegas, the transition from World Champion to playable character will begin.

And then there’s another item at stake. Pride.

While the items above are noteworthy, there have only been a handful of Golden Tee World Champions in the history of the game. Some will attempt to add yet another win to their resume.

A victory in Vegas will propel this person in an elite group for eternity. History will be made.

And it will happen on March 16 and 17 at the Las Vegas Convention Center. Watch history unfold on the live stream, which will be provided on Goldentee.com. We’ll have much more on the Golden Tee World Championship leading up to the event. We’re only getting started.