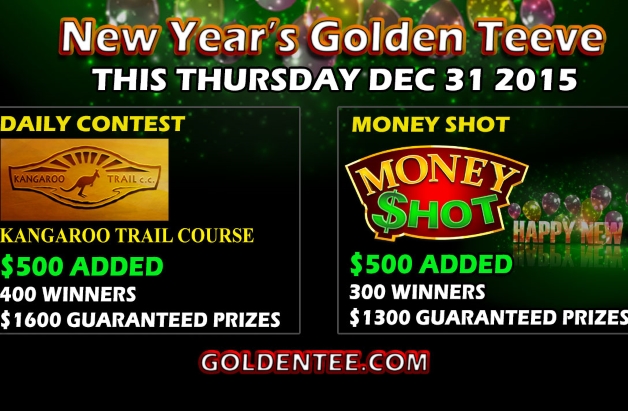 Celebrate the end of one year and the start of another by competing for enormous prizes on the Daily Contest and Money $hot. Back for another year is New Year’s Golden Teeve—our NYE extravaganza. It goes well with ridiculous plastic hats and cheap, hangover-inducing champagne.

For those who played along on Blackout Wednesday, the following should sound familiar: On December 31, $500 will be added to the Daily Contest and Money $hot prize pool. It was a good year, and we’re saying goodbye accordingly.

From 12:01 a.m. to 11:59 p.m. central that Thursday—up until the moment the countdown begins—players can score big in both game modes. The more play that comes in, the more each prize pool will increase. Hone in on pins and winds in the Daily. Master different looks on the same hole in Money $hot. Give both a try, why don’t you? It’s a celebration after all.

All you have to do is play. Be sure to visit your local watering hole on New Year’s Eve—something you shouldn’t have an issue with—and enjoy a little Golden Tee before 2016 kicks into gear.

Happy New Year’s Teeve to all.