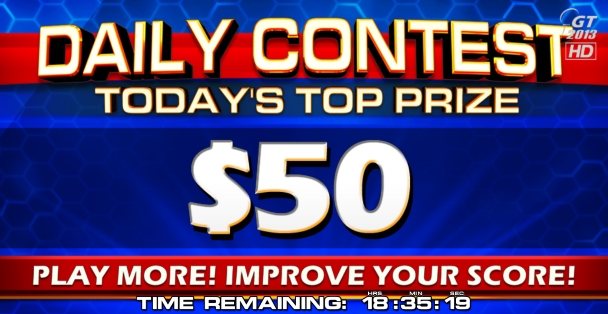 One game. That’s all it takes.

In Golden Tee LIVE 2015, your own brilliant 18-hole performance can earn you prizes that haven’t been seen since the days of Golden Tee Fore!—no strings attached, no catches, no fine print.

How is this being made possible? Through the all-new Daily Contest, one of the most exciting game modes GT has ever introduced.

When 2015 launches in late September, Daily Contest will launch with it. The name, as you might imagine, outlines exactly what you can expect: one contest every day—open to the Golden Tee world—with the same conditions on the same course for every single player that swipes their card and chooses this option.

If it sounds a lot like Prize Play, that’s because it is. The similarities, however, stop here. Unlike Golden Tee’s current Prize Play format, you can play in the Daily Contest as many times as you like.

Don’t like your score? Try it again. Think you can master the setup better on your third, fourth or fifth attempt? You’re probably right. You have 24 hours to put up the best score you possibly can on the highlighted course with the same conditions—a 2015 creation that will be selected at random each day.

Your best score will then be placed on our online leaderboard (which is currently under construction). This leaderboard will update regularly throughout the day, meaning you’ll be able to see where you stand early and often. You’ll be able to access this information on LIVEWIRE and also the Golden Tee Caddy app. 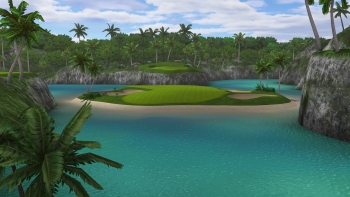 When the feature launches, the top 100 finishers for a day will walk away with cash prizes. The top prize—to start—will be $50.

This, however, comes with a few necessary caveats.

The first, and most important, bit of information to include is the exponential nature of these payoffs: the more you play, the higher the prizes will become. While $50 will be the top prize to start the day, there’s no ceiling on this prize (or any prize for that matter). As more games are played, more money will be added to the prize pool.

On top of the potential for growth, it’s our intent to grow this contest and pay out more players. There’s no timetable on this; it could come after a few days or perhaps it will take months.

Although the top 100 will be daily winners to start, that number could increase significantly depending on play. We’re going to launch the contest with set parameters and adjust based off player (your) behavior. As it increases in popularity, the base payouts and winners will increase as well.

Wherever the payouts end up, they will be big. The competition will be glorious, and more importantly, it will be 24/7 each and every day. You have more ways to win in Golden Tee 2015, and we’re only getting started.

Stay tuned to Goldentee.com for much more on the Daily Contest and the exciting new features and additions.