NEWS
Saving the Best for Last
Watch Chris Eversole Drain a Hole-in-One to Cap Off His -32 on Highland Links
http://twitter.com/share
Prev News | Next News

A great round in Golden Tee is relative. For some, even par is a good round. Others would be content with -10. Another group would be deeply satisfied with a -20. And then there are the great rounds that reach an entirely different stratosphere, and that’s where Florida Golden Tee pro—and former GT world champion—Chris Eversole comes in.

Eversole’s round on Highland Links was special before Hole 18. Poised to hit it on the green and take his eagle putt, he would have been more than content with a staggering -31.

And then this happened.

In the world of YouTube, we’ve never seen anything like this. Sure, we’ve seen brilliant shots before—shots much more impressive than this—but never for a -32. As for what the rest of the round looked like, we’ve got the hole-by-hole to show you. 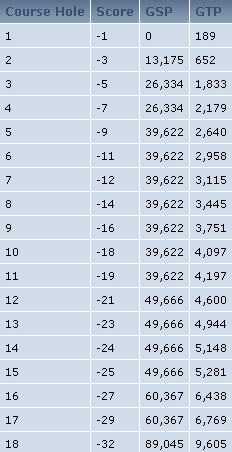 For those curious—and you likely are—this was just a few shots off the pace of the all-time best round of -35 shot by Chicago’s Graig Kinzler. Still, Eversole’s recent achievement is one of the best we’ve seen in recent years.

Congratulations to one of the game’s most storied players on a round—and YouTube—to be celebrated. Now, who’s ready to upload the shot that earned them a -33?