NEWS
The 19th Hole: Nick Z. & The GT Soundtrack
Behind the soundtrack of Golden Tee.
http://twitter.com/share
Prev News | Next News 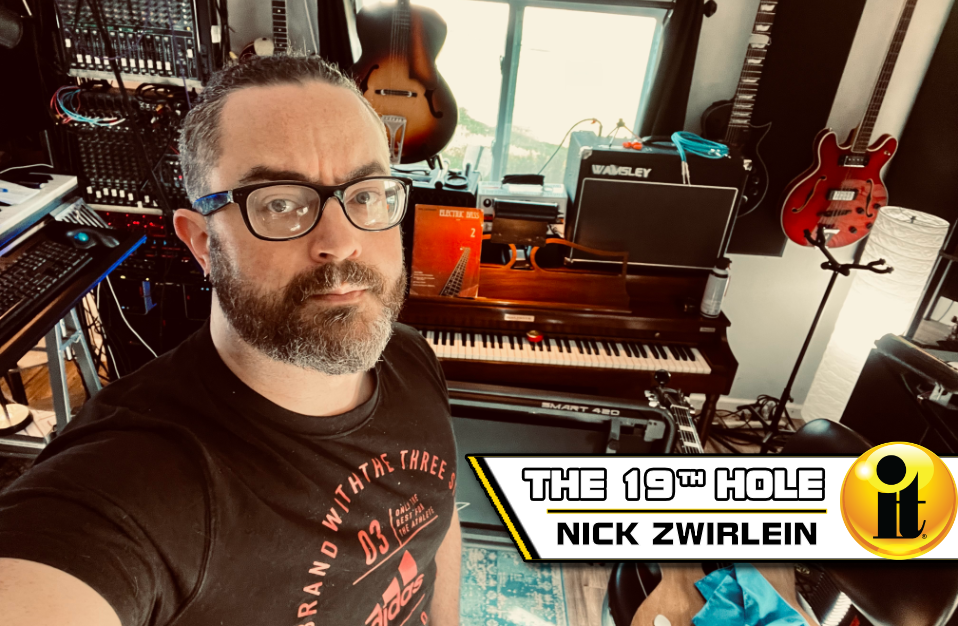 The impact of sound in modern entertainment can more than rival the weight of its visual elements. Sound like a stretch? Try this exercise. Cue up a scene from your favorite film or television show, and mute your TV before you press play. What’s missing? Well, depending on the content you’re watching, damn near everything. Dialogue between the characters (unless you can read lips), sound effects that bring life and energy to on screen action and movement, and a soundtrack to set the tone for the story being told, guiding the audience to a cozy place of suspended disbelief and imagination. A well-written soundtrack takes you somewhere, and this generally hard and fast rule of audio’s role in visual-based entertainment applies to the video game industry as much as it does anywhere else. We sat with Incredible Technologies’ Nick Zwirlein, Sound Designer & Composer for the Golden Tee arcade releases, to discuss how he utilized this audio magic to take video golfers on a fantastical golf adventure in Golden Tee 2022.

Nick’s first steps in forging the player’s journey begin in the annual game dev process, once Jim Zielinski, Course Designer and Co-Creator of Golden Tee, has decided where players will travel to in the next cycle of courses, and the art team is hard at work with the herculean task of painting the digital canvases and locales they’ve been afforded. This is where Nick’s work begins.

Equipped with a set of geographic locations, their respective cultural points of interest, and a library of visual references from the art team, Nick digs into a search for audio and musical references as a base for his creative inspiration. “I oftentimes get pictures, reference photos, of what they’re thinking, because the art hasn’t taken shape yet.” This most recent release, Golden Tee 2022, would be Nick’s first at bat shouldering the task of creating the ENTIRE soundtrack on his own, having written a couple of tracks for Golden Tee 2020 and half a dozen for Golden Tee 2021. “I didn’t know the whole scope of it when I started, which probably helped. To avoid overthinking it, I took the folders in order of ‘auto sort’ and just started digging into references.” 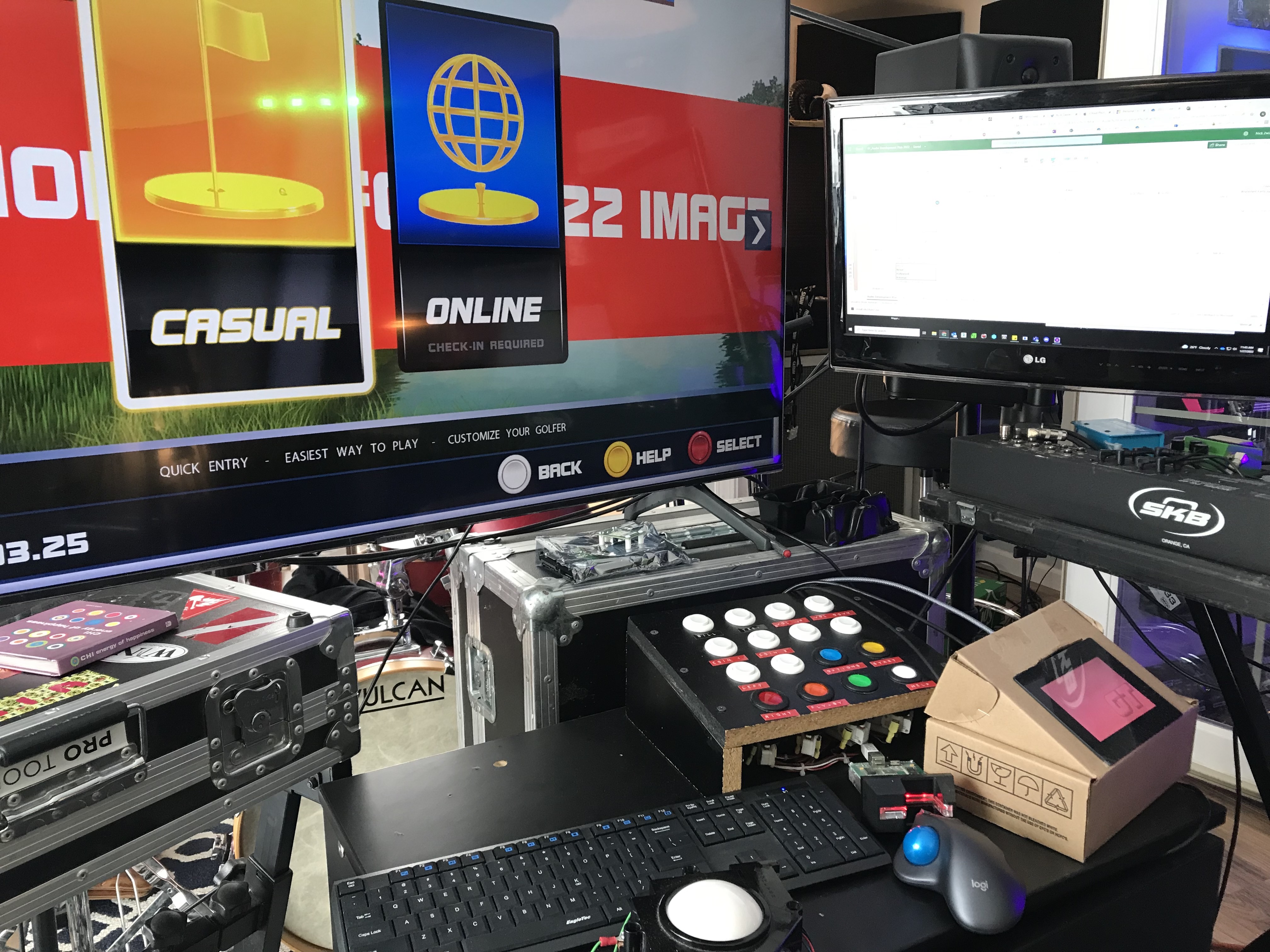 Nick described the dialogue that occurs between himself, the GT art team, and Jim Z. during this process, “The main thing is soliciting feedback as early as possible. The other thing I try to do is just go right up the middle with the first thing you think of when you think of that location. As long as you're not trying to be too cute with it or too clever, it usually works. There've been times where one of the challenges is if we have a certain biome, and two of the courses are similar,  that can take a little bit of planning to figure out how to make them different and distinct. And you'll have kind of played “Madlibs” sometimes where you're like, okay, I could go this direction with this course, but then I can't go do it for this other course. And Jim Z. will say, yeah, switch those, and I'll start writing it, and I'm like, “oh yeah, he was totally right”. There've been some close calls where I almost took the wrong turn, but so far it's been working out pretty well.” We’d have to agree, it sounds like it’s working out pretty well.

Nick details another part of the process, mocking up the tracks before working on what will become the final renditions. All of his compositions begin life within his DAW (Digital Audio Workstation) utilizing what are known as software instruments, digital recreations of their real-world counterpart. “I try to make it good enough that it could ship. If something blew up, and I needed to spend time fixing something else, the track could ship.”

“I'll send a reference to Jim Z of kind of what I'm thinking. And then I write a one minute tune, and once he approves it, then I write the whole tune. In the past, we’ve had times where people have written entire songs that have got the thumbs down, and that can be a lot of time spent lost. Fortunately that hasn't happened to me yet, but I had some things that I would've gone the wrong direction on if I hadn’t solicited more feedback. 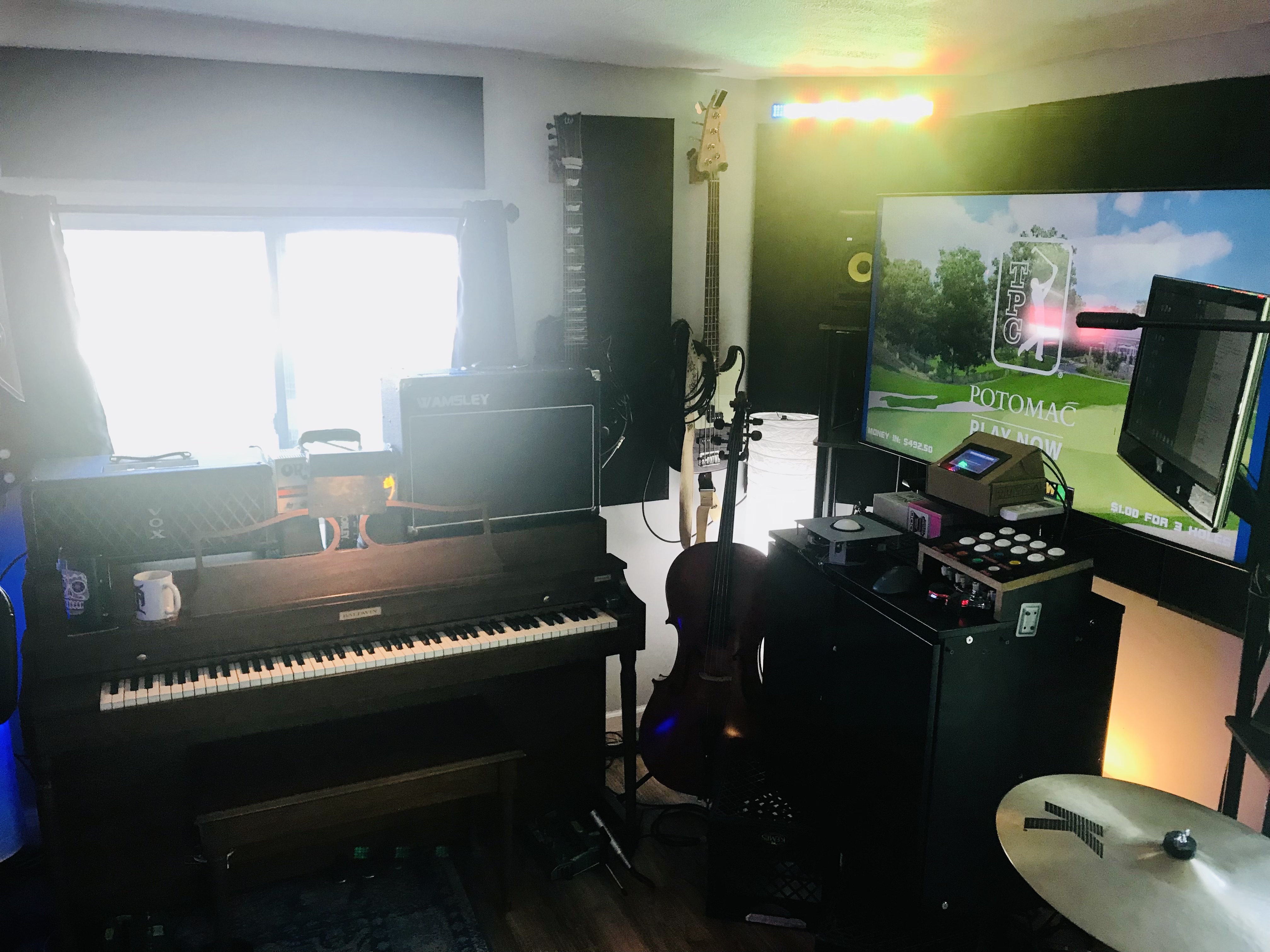 Nick’s approach and process have evolved during his career at Incredible Technologies, graduating from being a contributor to Golden Tee’s soundtrack to signing his name as the author of the entire thing, and from compositions created entirely from software-based instruments to ones that include increasing amounts of real-world recordings of physical ones.

“It’s been pretty organic. I've had more and more autonomy, and it's a lot more flexible. Recording live was really experimental when I started doing it, and I wondered if it was just gonna be a huge pain, and then it wasn’t. If you choose the right kind of performers, and you record 'em the right way, it can actually be easier. There are some people that you put a mic in front of, and it just sounds like a record. It sounds like it's done. It doesn't always sound that way when you're trying to do something with a mouse. You’ll end up automating things to death with software instruments to try and make them sound ‘real’ in terms of note length, little slides, hammer ons, and pull offs that you don't even think about, and you kind of get that for free when you record it. Whereas if you tried to do that with a mouse, it would be an enormous amount of work just to do stuff that you just do automatically when you're playing it on an actual instrument. So it’s been trending that way a bit, and I haven’t gone crazy with it, but it’s definitely something I’m excited about doing more of.”

The development cycle for Golden Tee 2023 is in full swing, and Nick is hard at work crafting the next album of golf time bangers that’ll whisk fans to an entirely new set of fantastic virtual destinations. We can’t wait to see and hear where we’ll be teeing off next. Until the next time we meet again on the 19th Hole…we’ll see you on the course.

We’ll be back with more creative insight from Nick Z. and deeper dives into his influences and processes in writing the soundtrack for each of the Golden Tee 2022 courses!