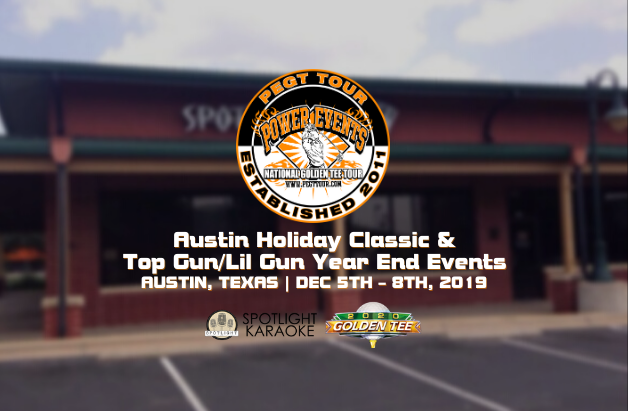 The Austin Holiday classic already has a whopping 160 players already signed up! Things will really be heating up on the machines and in the bar with that many players entered for a prize pool of $10,000! Remember if you're not signed up, you can do so here, or just show up before 12pm Saturday, December 7 to sign up in person.

The Austin Holiday classic will begin on Thursday, December 5 at 7:30pm with CTTP (Closest -To-The-Pin) and Money Shot. The entry fee is $10 a piece and these contests will be double-elimination. This is a good way to get comfortable with the tournament atmosphere and to start off the weekend in a fun and friendly manner!

Saturday is when things really start heating up in the early afternoon. The Main Event will start at 12:00pm and be a 5-course qualifier of the 2020 courses. With 152 players already signed up, this will surely take some time and be extremely competitive! The top 32 players with the lowest combined scores will advance to the double-elimination Championship bracket. The rest of the players will compete for the single-elimination Purple bracket. The entry fee is $100 with a chance of winning a large amount if you place high enough!

Sunday in Austin, Texas is one of the busiest Golden Tee days of the year! The Championship bracket and Purple bracket for the Holiday Classic will start at 12:00pm. Then directly after, the Big Gun / Lil Gun tournament starts. This tournament is for players who have played at least 2 PEGT events throughout the year and have accumulated the most points. Each player gets a specific amount of points for placing in each PEGT tournaments over the year. At the end of the year, they compete to find out who the Big Gun and Lil Gun's are. Top Gun is a 32 player double-elimination bracket and Lil Gun is a 32 player single-elimination bracket.

That's a lot of Golden Tee in only 4 days and a whole ton of fun! If you can't make it, make sure you are tuned into Golden Tee's Live Streaming all weekend on Twitch and YouTube. Don't miss any action by subscribing now!

For more information or to sign up, visit PEGTtour.com or check out the Facebook event. Walk-ups are always welcome as well!