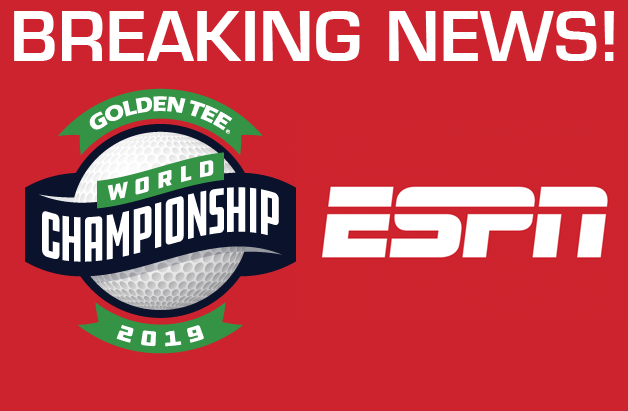 On June 21 – 23, the much-anticipated World Championship event returns to The Orleans Hotel and Casino in Las Vegas.  Up for grabs is more than $135,000 in cash prizes, headlined by the $30,000 first-place prize. The event will feature 74 of the best video golfers on the planet, and will be livestreamed on Golden Tee’s Facebook, YouTube and Twitch channels.

“The World Championship is the perfect culmination of Golden Tee’s 30th anniversary,” said Don Pesceone, IT’s VP of Amusements. “We pride ourselves as one of the original esports, and our collaboration with ESPN speaks volumes to the longevity and competitive nature of our game that has been the driving force for decades.”

The 30-minute program will be showcased on ESPN networks later this summer—highlighting some of the weekend’s most impactful moments. It will conclude with the crowning of a new Golden Tee champion, and the largest cash prize ever awarded in the game’s history. The time and network designation for the telecast will be announced at a later date.

Golden Tee Golf first appeared in 1989 and began offering online skill contests in 1995, making it a pioneer in the esports genre.  More than $100 million in prize money has been awarded to millions of players through a variety of online skill-based contests and live events.

Qualifiers for the World Championship earned their spots through a series of online events over the past four months.  “The competitive field has never been stronger”, said Adam Kramer, Golden Tee’s project director. “We believe the expanded audience through ESPN will enjoy a gaming experience unlike any they have ever seen.”