NEWS
Close Out the Year in Style
Power Events' Houston Holiday Classic is This Weekend! Don't Miss It!
http://twitter.com/share
Prev News | Next News 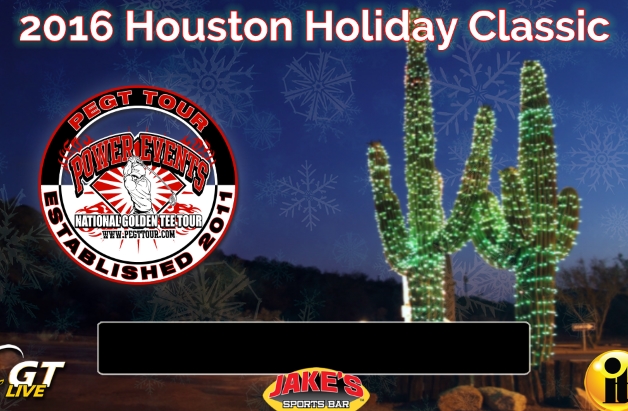 What a fitting end to a glorious year of competitive Golden Tee. Power Events’ Golden Tee Tour, a staple in the GT calendar, will tie a bow on another brilliant campaign with one final event this weekend.

But here’s the thing about the Houston Holiday Classic. It’s not just one event. One weekend, two tournaments, two champions. And many other events in between.

A ton of cash is at stake, as is a spot in the Golden Tee World Championship. And it all starts this Thursday, December 1, at Jake's Philly Steak. The event will run through Sunday, December 7.

If you have been waiting for the right event to attend—or you simply are looking for a fun weekend of good company and great Golden Tee—make it this one.

It begins on Thursday with a double-elimination Closest-to-the-Pin Contest. On Friday afternoon, there will be a doubles tournament. Later on that night, the focus will shift to the Handicap tournament where literally anyone can win.

Qualifying for the main event will begin on Saturday. All players participating will play the five current 2017 courses. The 32 players with the lowest combined score will be placed in the gold bracket; the remaining players will compete in the purple bracket.

Once this tournament has been decided, the next event will begin. The 32 players who have accumulated the most PEGT Tour points throughout 2016 will face off in one final Player of the Year tournament.

The winner of this double-elimination contest will not only walkaway with cash prizes and one of the most prestigious tournament titles; they will also lock up a spot in the Golden Tee 2017 World Championship.

There is so much to do, so much at stake, and so much brilliant Golden Tee to be played. And you can still sign up. Walkups are always welcome, as our spectators. If you're in the area and simply want to see what it's all about, do stop by or a beer or two.

Can’t attend? There will be a live stream of the event, thanks to our friends at Golden Tee TV.

Need more information? Visit PEGTtour.com for much more on this tournament and a new batch of events coming in 2017.