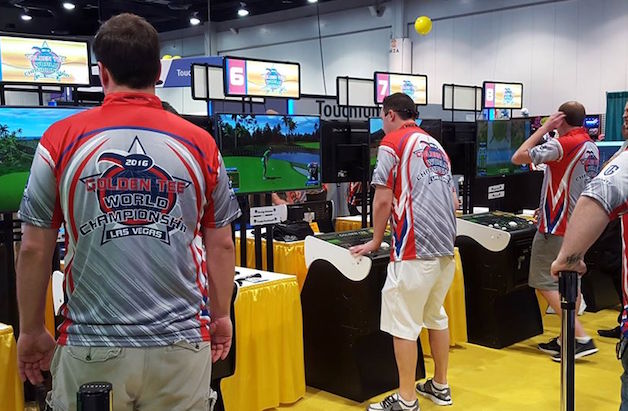 LAS VEGAS – The return of Golden Tee’s most storied event did not reintroduce itself quietly. Playing at the Las Vegas Convention Center, 32 players competed in Day 1 of the GT World Championship.

By the time the day had ended, half the field was eliminated. Along the way, there were upsets. There were unbelievable scores and shots. There was heartbreak and euphoria. Championship bids were saved or born; others were lost.

Seven of the eight top qualifiers coming in held serve: Marc Muklewicz, Andy Fox, Andy Haas, Mark Stenmark, Evan Gossett, David Duncan and Paul Luna all won both of their matches. Adam Ashley joined them, who was the No. 24 seed coming into the event.

The updated full tournament bracket can be found here.

Day 2 will kickoff at 11 a.m. pacific time with all eight games in action. The 16 remaining players will attempt to keep their hopes at the $10,000 top prize alive.

Some of the early highlights include a showdown between Stenmark and Gossett, Luna and Duncan and Haas and Fox. Other players with a loss will attempt to delay elimination or perhaps extend their tournaments much longer.

We’ll have all the updates, including a live stream of the event, right here. Tune in to watch the action unfold.