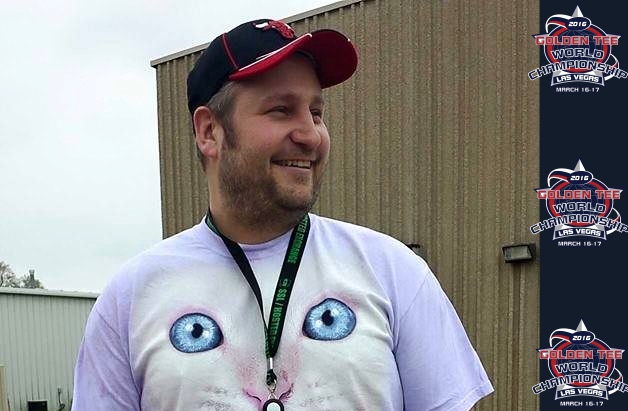 The first Golden Tee tournament I ever attended was a Golden Tee World's Regional event in Joliet, Illinois. This was about 18 months before I started working for the company and about two after I began playing. I entered the ballroom back in 2008, having no idea what I was in for. And then I heard a voice.

It’s a voice I have since heard countless times since. It is a voice that has uttered things I could never publish on this website without being immediately fired.

My introduction into the competitive world of this glorious game came when Marc “The Mouth” Muklewicz was yelling across the room at someone or something.

The “what” is no longer important, but the yelling was unmistakable.

If you have attended a Golden Tee tournament that Muklewicz has attended, you know it. You know it because, quite simply, there is no one quite like the man in the cat shirt or no shirt at all.

But beneath The Mouth’s mouth is one of the most gifted shot-makers in the history of Golden Tee and the wildcard of all wildcards entering the biggest event of the year.

And now, heading into the Golden Tee 2016 World Championship, Muklewicz is the No. 1 seed.

“I’m the best in the world at something millions of people do right now,” he said. “But my goal is to win. I want to show people I’m not here to screw around.”

Let’s go back a bit before we look ahead.

Around 2005, “The Mouth” was born. That was when Muklewicz began to play competitive Golden Tee. The first event he ever played in, he walked into the location unsure of what to expect, just like I was at one time. But the similarities stopped there.

“Who wants to play for some high stakes?” Muklewicz yelled to the entire room, unconcerned by the unfamiliar. Quickly, this became common practice. A persona was born.

Over the next few years, Muklewicz’s game grew. So did the reputation. So did his voice. He qualified for the Golden Tee 2008 World Championship No. 32 overall. Thrilled to be a part of the field, he took on eventual world champion Andy Haas in the opening round. He played a quality game, but it was not good enough. Playing single-elimination, his event ended before it began.

“I played consistent, the guy just didn’t make a mistake the whole time,” Muklewicz said. “That changed the way I wanted to approach these moving forward.”

After qualifying for this year’s event on the Daily Contest, Muklewicz made seeding a priority. While he had not playedGolden Tee as much as he used to leading up to late last year, that changed over the past few months. Using the Golden Tee World Rankings to set the bracket in the month of February, Muklewicz got hot.

This came only a short time after Muklewicz’s poor showing at Power Events’ Houston tournament late last year—a weekend he called “the worst Golden Tee of my life.”

But that feels like ages ago. Suddenly, the man who has never had an issue with confidence has more of it than he has had in some time. And this could be a very important weapon for a player who thrives off the moment.

In many ways for The Mouth, this can be a good or bad thing. When he’s running well, he’s almost impossible to conquer. Just watching him play Golden Tee is performance art. His body never stays in one place for too long; his limbs are in constant motion. And when he needs extra distance, he hits the deck of the machine just about as hard as anyone.

The goal for Muklewicz is to keep it that way—not get too high or too low during a marathon event.

“Match play is a different animal. You play the player,” Muklewicz said when asked about his mentality. “I’m going into this thinking about playing Golden Tee.”

Staying that way is difficult. Not to get too confident or too down. The emotional roller coaster that comes with match play can get anyone. For Muklewicz, it boils down to finding consistency.

One thing is certain. This is something you should remember if you plan on watching our live streaming coverage for the event. His matches are never boring.

Muklewicz once lost a match against Houston’s Mark Stenmark by blasting off the pin on Hole 18 with a lead. His ball trickled into a pot bunker, and ultimately he was unable to overcome the horrendous break.

Other miraculous moments have gone his way; he’s stuck shots that have thought to be impossible to win games against some of the best players in the world.

He’ll take the impossible shots if he has to. Sometimes even if he doesn’t.

As for what we can expect to hear from The Mouth come tournament time, this is to be determined. Although the man who always has something to say at a volume that is impossible to ignore has a more business-like approach brewing.

“Quiet just doesn’t happen with me,” Muklewicz said. “You’ll get to see the transformation when the tournament ends.”

The Golden Tee World Championship will be played on March 16 and March 17 at the Las Vegas Convention Center. Stay tuned to goldentee.com for more.