NEWS
Here They Are
Recapping the Golden Tee World Championship Qualifier and Looking Ahead
http://twitter.com/share
Prev News | Next News

The field of 32 is set. We are now one step closer to crowning a Golden Tee World Champion on March 17 in lovely Las Vegas, Nevada.

After months of competitive play and countless games, the qualifying portion of the Golden Tee World Championship came to a close on January 16. The end did not come quietly, either. We saw some late movement—huge scores coming at the final moments—that ultimately reshuffled our field and reshaped the event entirely.

When the dust finally settled, we were left with the following final qualifying standings.

The 32 names below make up this year’s World Championship field. 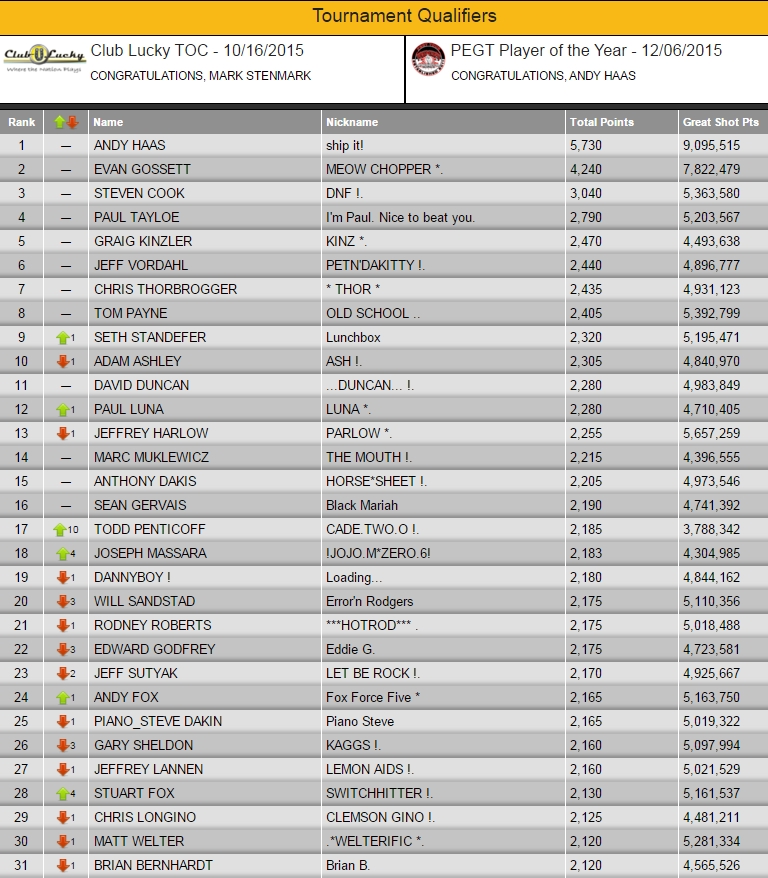 Before we dive into the next steps, a few notes on the group above.

We are still working to confirm that all 32 of the qualified players will be able to attend, which means this is not the final field just yet.

This is the group that will get first crack. If a player from the group above cannot attend, we will dip into the alternates (aka the next names on leaderboard). We hope to have this finalized by the end of the week if not sooner.

We also want to highlight Ohio’s Andy Haas for essentially qualifying twice. He won Power Events’ Player of the Year tournament, which won him a spot. He also finished first overall in qualifying on the Daily Contest.

Haas will not have two spots in the tournament, of course, although the achievement is noteworthy regardless. His prize for such efforts will be a delicious cold beer of his choosing in Vegas.

As for what’s next, it’s quite simple, really. Seeding.

As we gather intel on our qualifiers—and we plan to highlight all 32 participants before the March 16 event at the Las Vegas Convention Center—we will begin seeding for the tournament on February 1. Using Golden Tee World Rankings, we will fill the 32-man bracket in the month of February.

As part of this process, we will showcase an updated bracket on Goldentee.com throughout. More on that soon.

Congratulations go out to the players who qualified for the event. This is the beginning of an exciting process—one that is only just beginning.