The first-ever Golden Tee Home Edition contest has officially come to a close. Before we get to the finally tally, however, here’s an overview of the contest.

It was all quite simple, really. The August Open was all about birdies or better, and the 20 players to finish the month with the most under-par holes would walk away winners. Prizes included FREE Golden Tee 2015 updates, IT Bucks, gift cards and more.

All you had to do was play 25 games throughout August and you were eligible. Not only that but reaching this threshold of games meant you were eligible to win a FREE Golden Tee 2015 update regardless of where you finished on the leaderboard.

From day 1, however, the Golden Tee Home Edition owners responded in a big way. That passion continued throughout the month, and by the end, 187 players played 25 games or more. That is truly remarkable. Taking this one step further, more than 19,000 games were played on Golden Tee Home Editions this month. This shattered the previous high.

Thank you to all of the Golden Tee Home Edition owners that participated. Now, let’s get to the final tally. 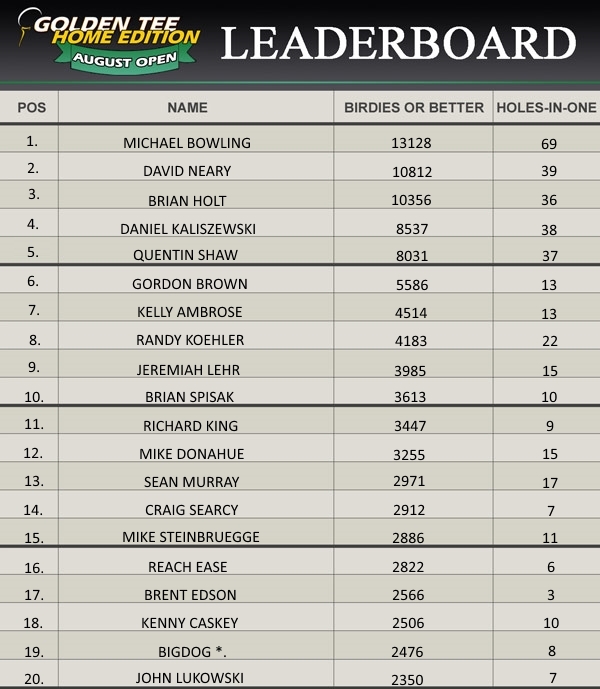 Yes, Michael Bowling went coast to coast, and his 13,128 birdies or better—which is an obscene amount of birdies—will earn him Golden Tee 2015 free of charge. The rest of the top 20 will take home the following prizes.

Are you in the top 20? Stay tuned. You will be hearing from us this week.

Did you just miss this cut? Have no fear, we’ll be doing plenty more of these in the not-too-distant future. PLUS, if you played 25 games, you might be the lucky winner of a 2015 update. Those two winners will be announced later this week.

Stay tuned, and thank you to everyone for a wonderful month.