This is about more than Golden Tee. It’s about the community, camaraderie, the experience and, most importantly, it’s about making a difference.

The three Players Charity Championships have held a special place in the GT community for these reasons, raising more than $175,000 for charity since 2006. In June of 2014, the PCC will officially celebrate its fourth installment.

And trust me when I say you do not want to miss it.

This isn't just a GT tournament. This is a weekend for everyone—from the pros, to the casual fan, there's something for everyone. And by "something," I mean a weekend of exciting happenings well beyond hitting the trackball.

There will be plenty of that, too.

Video Golfers for UnderDogs, Power Events Group and Incredible Technologies have teamed up to bring you one of the most incredible Golden Tee events of all-time. In celebrating of the 25th anniversary of the game you love, more than $25,000 in cash and prizes will be added to the 128-person field.

The tournament weekend will take place at Nero's Pizza & Pub in Algonquin, Illinois on Thursday, June 5 through Sunday, June 8. Included in this weekend will be a Closest-to-the-Pin tournament, a doubles event, a handicap tournament and, of course, the main event.

The weekend itinerary—which can be seen on the official Players Charity Championship IV website—is only a part of the experience. The main event will likely be the largest Golden Tee tournament in years—featuring some of the game’s most storied players from various installments.

It will take place on Saturday (June 7), and registered players will play all five of the 2014 courses for the qualifier. The top 32 players with the best combined score will move to the main bracket, while all other players will be placed in the purple bracket.

On Saturday night and Sunday, double-elimination match play will begin until a PCC champion is crowned. The tournament should be thrilling from start to finish. But again, this is only a part of the bigger picture.

As has now been customary for all PCCs, an integral part of this event is about raising money for a charity. In 2014, we’re celebrating multiple charities.

Starlight Children's Foundation, Nikolas Ritschel Foundation and Salute, Inc. were all voted as the benefit charities this year. Money raised between now and the tournament weekend will go directly to these three charities. You can read up on each here.

And that’s where you come in. Your involvement is what makes the tournament so special.

To participate in the weekend—and trust us, with what’s in store you’re going to want to—you must raise a minimum of $400 by June 1.

You've got plenty of time, and again, it’s all for some wonderful causes. Not only that, but there are proven, step-by-step instructions posted on the site to help you fundraise easily and painlessly.

Not only that, but the top 10 fundraisers will have the opportunity at winning their very own Golden Tee Home Edition! Those who finish in the top 10 will be entered into a raffle, and one lucky person will walk away a winner. 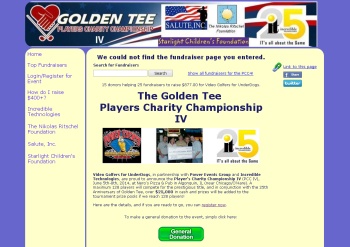 To get started, register for the event online here. You’ll be asked to pay the $75 entry fee into the main event at that point. After doing so, you’ll be setup with your very own fundraising page.

While there might be time before June 1, registration is open to the first 80 players who agree to raise money for charity. There could be additional spots opened although none are guaranteed.

Translation: If you’re interested in playing and being a part of the weekend, sign up now. Spots are already filling up and the rest will fill up fast.

As for what else you can expect, well, the items are building: Tee shirts, door prizes, gift cards, giveaways, raffles and other exciting events that will take place throughout the weekend—all centered around good people, food and drink—are being coordinated now. There’s so much to get to, and we will get to it in time.

For now, however, visit the Golden Tee Players Charity Championship IV website and find out everything you need to know about this incredible event. And if you want to register, you can do that now.

If you simply want to contribute to some wonderful causes, you can do that also. In fact, all donations, regardless of whether you plan to play or not, will come with some exciting GT perks. We'll have more on that soon.

There are exciting times ahead; and we can’t wait for you to be a part of it.