NEWS
The PCC is Here
Everything You Need to Know About the Biggest GT Weekend of the Year
http://twitter.com/share
Prev News | Next News 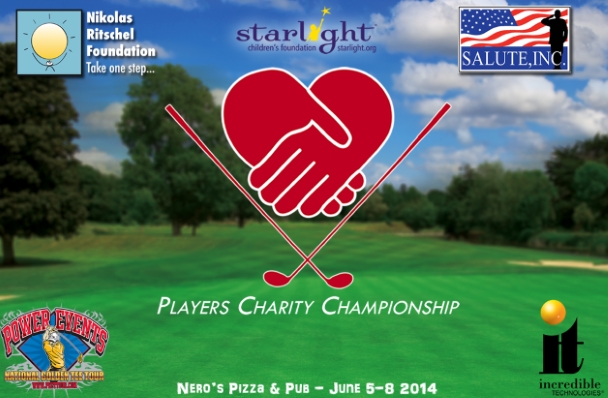 The Players Charity Championship—Golden Tee’s biggest weekend in 2014—is here. And you do not want to miss it.

Playing? Thinking about stopping by for a beer? Like awesome prizes like a Phil Mickelson signed US Open flag (thanks Callaway!) and Golden Tee? Want to make a difference and help out three amazing charities?

Of course you do; here’s what you need to know.

Nero's Pizza & Pub in Algonquin, Illinois will host the event this weekend. It will begin on Thursday with the CTTP tournament at 7:30 PM. On Friday, there will be a doubles tournament at 3:30 PM AND a handicap tournament at 8:30 PM. You’ll also be able to play on open games—over a drink or two or three—throughout.

More than just a Golden Tee tournament, this is a celebration. There will be bands, giveaways, a silent auction surprises and much more, all in the name of three amazing charities. Those charities are SALUTE, INC., The Nikolas Ritschel Foundation and Starlight Children's Foundation.

Thus far, more than $36,000 has already been raised! We’re not stopping there, though. In fact, we’re only getting started.

Even if you’re not playing, you can make a difference. You can also be rewarded for doing so.

It's about Golden Tee, it's about the people and it's especially about the charities. From Thursday to Sunday, Nero's will be the place to be. Even if you're not playing in any of the tournaments, come on by and watch some of the game's best duke it out, all for three amazing causes.