NEWS
The 2012 Orlando Open
GT’s Tournament Season is Around the Corner, and You Don’t Want to Miss the First Stop on the PEGT Tour
http://twitter.com/share
Prev News | Next News

After a brief timeout, the Golden Tee tournament season is ready to kick into full swing once again.

The 2011 PEGT Tour was nothing short of a booming success, and in 2012 we have high hopes that this six-stop tour will be taken to another level. The tournament schedule will be very similar to what we saw in 2011, and Power Events will host events in Orlando, St. Louis, Chicago, Denver, Richmond, and finish in Dallas. 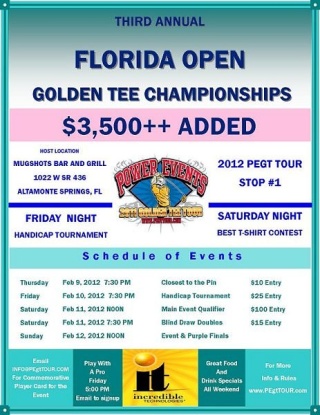 Players will accumulate PEGT Points at each of these events, and the top 32 players at the end of the year will compete in the Player of the Year Tournament following the Dallas Holiday Classic. 2012 promises to be big, REALLY big, and things begin on Thursday, February 9th through Sunday, February 12th at Mugshots Bar and Grill in Altamonte Springs, Florida.

If you’ve been looking to combine your love for Golden Tee with a nice weekend or warm weather, this is the event you must attend. Power Events hasn’t just put together an excellent tour, but they’ve also mastered the art of hosting a live event. You can expect the same quality weekend from they come early February.

Festivities get underway on that Thursday with a closest-to-the-pin tournament. Entry into this pre-tourney event is just $10. On Friday, a match play handicap tournament will take place, and entry into this event is $25.

At noon on Saturday, the Orlando Open will commence with a five-course qualifier. The thirty-two players to shoot the best overall scores will then be placed in the championship bracket, while those that don’t make the cut will be placed into the purple bracket.

Match play will begin on Sunday morning, and the first tournament champion of 2012 will be crowned later on that day!

You won’t want to miss this weekend, and any excuse to avoid the bitter cold – even for a few days – is one more making and a trip worth taking. Visit the official Orlando Open Tournament Thread on Underdogsports.net for more information or to sign up for the event. You’ll also find a list of very affordable hotel rooms here as well.

We’ll have much more on this event and other Power Events’ stops in the near future! Visit PEGT Tour's official website and stay tuned to Goldentee.com for more!